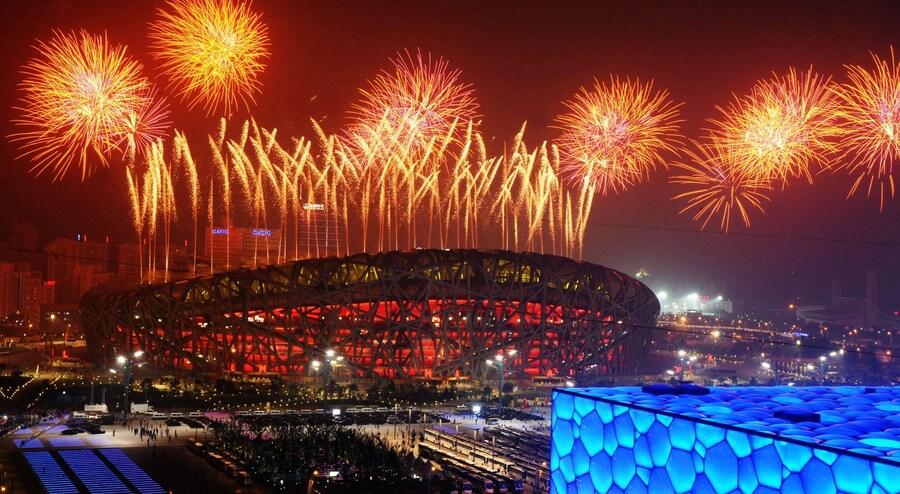 Photo taken on Aug. 8, 2008 shows the fireworks displayed during the opening ceremony of the Beijing Olympic Games held in the National Stadium, also known as the Bird's Nest, in Beijing, capital of China. (Phooto/Xinhua)

Winter sports fans can expect the opening ceremony of the Winter Olympics in Beijing to be "different "from that of the 2008 Games, which was also held in the Chinese capital, with a cauldron lighting method that will be "unprecedented", according to chief director Zhang Yimou.

Zhang, who also directed the opening and closing ceremonies for Beijing's 2008 Summer Games, will be behind the wheel again for the ceremonies for the Olympic and Paralympic Winter Games, making the 71-year-old the first person to direct both the Summer and Winter Games ceremonies as Beijing makes history as the first city to host both.

"It's a great honor to direct the opening ceremony for the second time," Zhang said, adding that "the burden is very heavy".

"I hope to make a good impression and create some wonderful moments that will go down in history," he said.

A renowned Chinese filmmaker, Zhang has been nominated three times for the Academy Award for best foreign language film－for Ju Dou (made in 1990), Raise the Red Lantern (1991) and Hero (2002).

The scintillating opening ceremony of the 2008 Games added to his prestige. He also masterminded Beijing's eight-minute handover performances at Athens 2004 and Pyeongchang 2018.

That was why the Beijing Games organizing committee decided to appoint him again, said Chang Yu, director of the committee's opening and closing ceremonies department.

"Director Zhang Yimou created the impressive 2008 Games opening ceremony that wowed the world," Chang said. "In 2017, we hired him to take charge of 'Beijing's eight minutes' in Pyeongchang, and he was able to present the world a different China in such a limited time with a well-received show.

"Therefore, when we decided on the chief director in 2019, we chose him again after careful deliberation."

"I think a lot of classics cannot be duplicated," he said. "They happen only once.

"Of course, we know that we cannot repeat Beijing 2008, so we are striving to be different from it."

Besides incorporating characteristics of the Winter Olympics and winter sports in next month's opening ceremony, Zhang said the theme will not be the same.

"In 2008, the Olympics were a brilliant stage and chance for our country to show ourselves," he said. "In fact, there are plenty of pages across our 5,000-year history that we would like to present to the world－our civilization, our history and how we got to where we are today.

"It's different now. China's status in the world, the image of the Chinese and the rise of our national status－everything is totally different now.

"In the wake of the pandemic, the world needs a new and strengthened vision, and that is people of the world coming together to face difficulties and looking forward to a bright future."

That has been reflected in a change to the Olympic motto, with "Together" added to "Faster, Higher and Stronger".

Zhang said he is determined to present a "different and unique "opening for the 2022 Games.

"The era is different, and so is the public's perspective," he said. "Also, the Winter Olympics and Summer Olympics are different, so I will let go of that burden and start from zero." 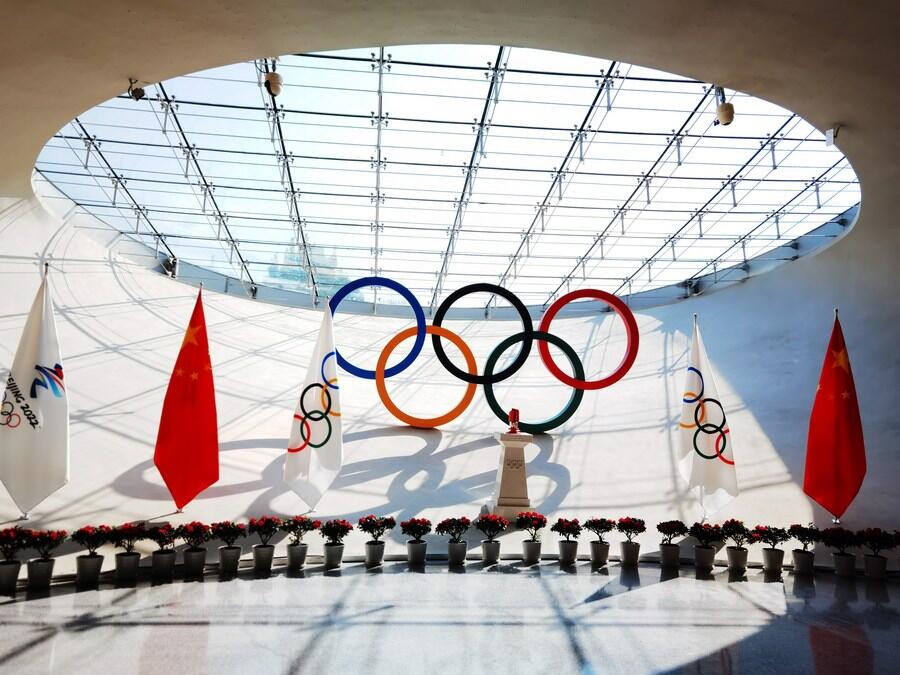 The Olympic flame for the 2022 Beijing Winter Olympics is on display at the Olympic Tower in Beijing, capital of China, Oct. 20, 2021. (Photo/Xinhua)

The opening ceremony will be in keeping with Beijing's efforts to stage a "simple, safe and splendid "Games, Zhang said.

There will be no lengthy, large-scale performance, with the number of performers cut from 15,000 in 2008 to 3,000, and the duration of the ceremony reduced to less than 100 minutes due to the cold weather and the COVID-19 pandemic.

However, the quality will not be affected by the decrease in quantity.

"Being simple, just as in martial arts films, is like a master's sword," Zhang said. "All his spirit is focused on the tip of the sword, and the power of his stab is different. It looks like a very simple stab, but with fateful power."

After the plan for the opening ceremony was finalized in May last year, and the stage design completed in October, performers began rehearsals in the National Stadium, also known as the Bird's Nest.

"This time, the way of lighting will certainly be different," he said. "It's a major reform of the opening ceremony. It will be unprecedented in the over 100-year history of the Olympic Games."

He hinted that the design was in line with the concept of environmental protection and low carbon emissions, but he refused to give more clues, saying, "it's a secret".

"I'm very nervous," Zhang said. "I think it's totally innovative, and people will be surprised."

"Not just athletes and professionals winning gold medals and achieving amazing things, but getting more people to participate in sports," he said. "It's always about the people. The spirit, emotion and hope are always the key points."

In the seven years since Beijing's successful bid, China has fulfilled its promise to engage 300 million people in winter sports, a powerful push in promoting winter sports globally.

The opening ceremony will also be characterized by engaging with the general public and diversity, with some performers coming from schools and grassroots arts groups. Representatives from all walks of life will be part of the ceremony.

"I think the expressions of happiness, health, spirit, self-confidence and inspiration are very important," Zhang said. "We also emphasize participation in many ways this time."

He said the pandemic has brought about changes in the world, with China facing a new and complicated international situation. That's why he hoped to present genuine thoughts of the Chinese people via the Olympic stage.

"What the Winter Olympics show is the Chinese people's confidence, pride, love and affection for the people of the world－our great philosophy and values," Zhang said.

"If we can showcase that in an artistic, emotional and subtle way through the opening ceremony, so that people can see the real inner thoughts of Chinese people, that will be very meaningful."