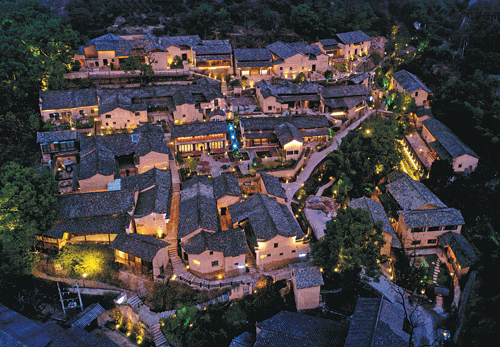 Less than a decade ago, farmers in Xiananshan reflected on the challenges faced by many rural people－their income from traditional agriculture, with per capita net income at less than 10,000 yuan ($1,580), made it hard for them to keep up with urban areas riding the country's rapid wave of development.

But many villagers in Xiananshan were also justifiably proud of their local heritage and resisted moving to the cities. The village dates back four centuries to the Wanli period of the Ming Dynasty (1368-1644).

Xiananshan is set amid the misty, verdant valleys of Liandu district in the city of Lishui, at the southwestern part of East China's Zhejiang province. More than 40 ancient homes and structures in Xiananshan are built in the architectural style representative of the mountainous dwellings in imperial times, and are one of the reasons the village is under municipal-level cultural relics protection.

Local resolve to retain and revive their scenic home, with government support and development incentives, has driven the people in Xiananshan to find an approach to progress in line with the national focus on inclusive growth and common prosperity.

Complemented by measures to encourage the cultivation of popular local bayberry products that provide more job and business opportunities to villagers, investments have helped the total income of the village's collective economy exceed 494,000 yuan, with its operating income hitting 185,900 yuan in 2019 alone. In the same year, the per capita disposable income of farmers was more than 35,000 yuan.

Room occupancy rates in the village have since reached more than 60 percent, with over 130,000 visitors contributing to travel revenues. Additional local activities and events, ranging from folk festivals, art exhibitions and fruit picking, have helped to increase the village's popularity.

The moves are in line with Zhejiang's roadmap toward common prosperity. Fueled by its coastal businesses, logistics and industrial hubs, the province is one of the country's most developed, and has been designated as a demonstration zone of balanced, shared growth for the next major stages of national development. The Zhejiang government aims to achieve common prosperity by 2035, with its per capita gross domestic product and the income of urban and rural residents reaching developed countries' standards.

In August 2021, a meeting of the Central Committee for Financial and Economic Affairs outlined steps to promote common prosperity through high-quality growth, calling for a phased approach to reach the target.

The road to common prosperity is expected to be comprehensive and long-term, and pursued in a gradual and progressive manner, with suitable areas offering replicable practices and models.

As a main indicator of balanced development, Zhejiang's income ratio between its urban and rural residents has fallen to 1.96:1, significantly lower than the national level, according to provincial authorities.

Cheng Changying, vice-president of Lianzhong Group, which is behind Xiananshan's major refurbishment projects, said its protection and promotion of traditional homes and lifestyles in line with sustainable development has helped provide a firm path to common prosperity.

Cheng, 51, a native of Lishui, returned to his roots after successful textile and other business ventures in other cities, to lead local rural development projects, including partnerships with farmers to promote their ecological products through e-commerce platforms.

"We've been working closely with the villagers since the project rolled out five years ago. At the beginning, there was basically no major economic activity or base to speak of. But the village was still very intact and that helped our work significantly, complemented by good transport links with the city and its resources," he said.

"Once we came in, the drive and the ability of the villagers were very obvious. They've since been able to bring together nearby communities to develop, relying on tourism, industry and enterprise, with rental yields and incomes all increasing," Cheng said.

"Their quality of life and wellbeing have all improved significantly. Visitors and tourists can all see that very clearly, with everyone resolutely on the path to shared growth."