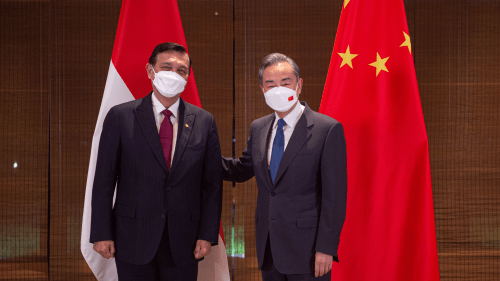 Noting the steady development of the comprehensive strategic partnership between the two countries, Wang called on the two sides to strengthen pragmatic cooperation in various fields and work jointly toward building a community with a shared future.

"China fully supports Indonesia in hosting the G20 (Group of 20) summit next year," he said, expressing hope that the G20 would play an active role in promoting world economic recovery and improving global economic governance.

Wang said China will continue deepening cooperation with Indonesia in vaccines and drug research and development and support Chinese enterprises in carrying out technological cooperation to help Indonesia become a regional center of vaccine production.

Noting that bilateral trade volume has increased by more than 50 percent year on year in the first 10 months of this year, Wang called on the two sides to strengthen trade and investment cooperation and expand cooperation fields such as new energy and electric vehicles.

For his part, Luhut expressed gratitude toward China for its support in providing vaccines, medicine, and anti-pandemic materials. He said Indonesia will further advance major projects under the Belt and Road Initiative and deepen infrastructure, trade and investment, health care, green development, and maritime cooperation.

The two sides also agreed that democracy should be advanced according to countries' own national conditions and be judged based on the satisfaction of their own people, instead of having Western standards imposed on them.