China's Lin Gaoyuan (left, front) in red and the United States' Lily Zhang (left, back) practice against Kanak Jha (right, front) from the US, and China's Wang Manyu (right, back) at a training session in Houston, Texas, on Monday. American and Chinese players will compete in mixed teams at the 2021 World Table Tennis Championships in Houston, which began on Tuesday and runs through Monday. (Photo/Xinhua)

Connie Sweeris, a "ping-pong diplomat" from the United States who has personally witnessed the power of sports, said she is hopeful about the upcoming Beijing 2022 Winter Olympics.

"It's just a great opportunity to gather the world together. We do want to get together and compete again," Sweeris said.

The USA Table Tennis Hall of Famer was a member of the pioneering team from the US that made the historic trip to China in 1971, which launched Ping-Pong Diplomacy between the two nations.

"When it's only every four years, for some of the athletes that are getting toward the end of their career and wanted to make the Olympics, they maybe cannot have another chance to make an Olympic team or make the Olympics," said Dell Sweeris, Connie's husband, doubles partner and also a Hall of Famer.

Five decades since the birth of Ping-Pong Diplomacy between the US and China, the couple firmly believe that sports can foster friendship between nations and peoples.

"When you compete against each other from countries all over the world, you begin to break barriers down, and you begin to understand their culture, and you have exchanges with them," she said.

"And it just brings about understanding between individuals, which then can seep into the rest of the culture. Especially for me, that became true in 1971, when I was on the US team in Nagoya, Japan, representing the US at the World Table Tennis Championships. On the last day of that competition, China had extended an invitation to our US team to come and play friendship matches," Connie Sweeris said.

"And as we did that, we realized that we were the first Americans that were going to be let into China since 1949. And when we got into China, the slogan when we played our matches was 'friendship first, competition second', and it broke open a door between our two countries to establish a relationship or diplomatic ties, and to begin talks with each other," Sweeris said.

"So to me, these exchanges can bring about the release of political tensions between countries." 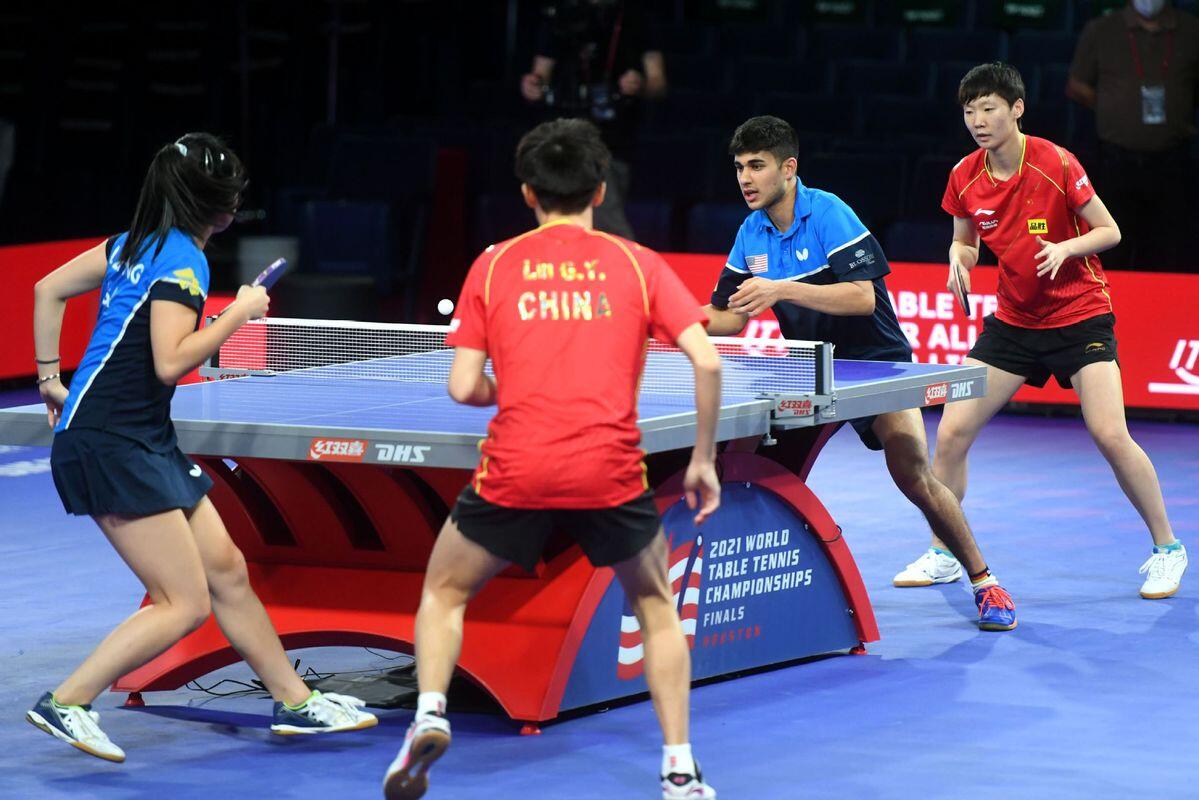 China's Lin Gaoyuan in red and the United States' Lily Zhang practice against Kanak Jha from the US, and China's Wang Manyu at a training session in Houston, Texas, on Monday. American and Chinese players will compete in mixed teams at the 2021 World Table Tennis Championships in Houston, which began on Tuesday and runs through Monday.(Photo/Xinhua)

The resumption and development of China-US ties over the past five decades has become an important event in international relations, benefiting the peoples of the two countries as well as those in other parts of the world, Foreign Ministry spokesman Zhao Lijian said on Tuesday.

Athletes from China and the US who took part in Ping-Pong Diplomacy in 1971 didn't show estrangement or hostility because of the great differences between the political systems, histories and cultures of their countries.

Instead, they showed "sincerity and friendliness from their hearts "and they exchanged gifts and hugged each other, Zhao said.

Mentioning that Chinese and US athletes will team up in the 2021 World Table Tennis Championships, Zhao said the two countries should not let a Cold War mentality dominate bilateral ties, and the US should take concrete actions to implement its statement that it does not want "a new Cold War".

Judy Hoarfrost, the youngest player in the nine-member US table tennis team that arrived in Beijing in 1971, said Ping-Pong Diplomacy had given her a unique perspective on how a sport can help bring people together. The sporting endeavor helped open up exchanges between the two countries, culminating in US president Richard Nixon's trip to China in 1972.

"The USA and China have many, many ties, business ties and personal ties, so many ways that we are interrelated now that we were not in 1971," she said.

"Ping-Pong Diplomacy was the thing that just ignited it and got it started. I do think that sports, and other cultural exchanges, play a huge part in bringing people together and nations together.

(Wang Qingyun contributed to this story.)