Zhejiang: The cradle of champions

The summary and commendation ceremony for the triumph of Olympic and National Games athletes in Zhejiang has just ended. Yang Qian, Guan Chenchen and other athletes and coaches of Zhejiang Province have been commended. They made outstanding achievements in the Tokyo Olympic Games and the Shanxi National Games. Why Zhejiang is called the cradle of champions?

The province's remarkable production line of talent centers on Zhejiang College of Sports. One of the college's most impressive success stories is Guan Chenchen. The 17-year-old topped the podium in Tokyo by beating American megastar Simone Biles, who wound up third, in the women's balance beam.

"The coaches are with us all the time. During major events, they notice any small changes in us and explain how to handle different situations, especially dealing with pressure. Also, the medical team help us a lot with any injuries."

Thanks to her Tokyo heroics, Guan attracts plenty of attention around campus, but the teenager is keen to move on from her Olympic gold without too much fuss and focus on the next medal. 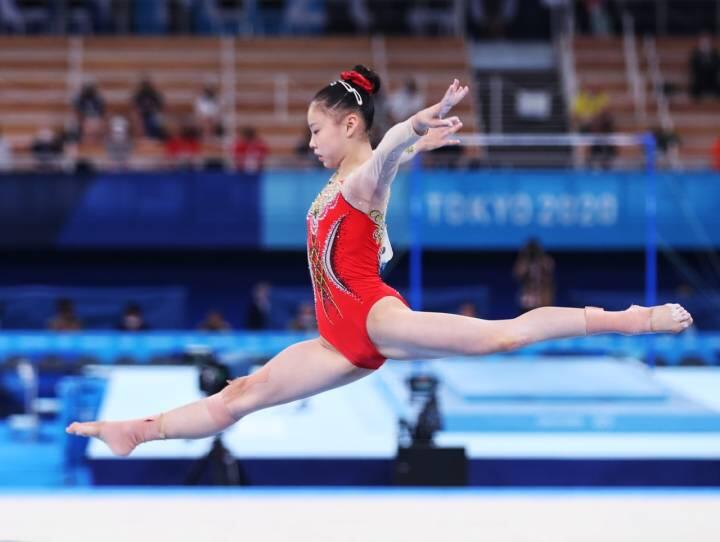 "The moment I won Olympic gold, I could not believe I had made it, but now I don't think too much about the Olympic medal. It's a milestone of my career, but it's already history," Guan said.

"After the Tokyo Olympics and the National Games a month later, I took a 10-day break back home. Now I have resumed my training and restored my physical strength, so my next goal is the Asian Games in Hangzhou next year."

Zhejiang College of Sports was established in 2006. It currently has 936 student athletes, as well as 641 students majoring in sports-related courses. Since its establishment, athletes from the school have won 13 Olympic gold medals, 81 world championship titles, 72 Asian Games golds and 111 National Games titles.

"In early 2018, we set three major targets for our athletes-winning gold at each Olympic Games, having better and better results at each Asian Games and National Games, and making breakthroughs at the Winter Olympics," said Lu Gang, the vice-principal of the college.

"Each sports major also sets goals, and they start to select potential athletes very early. To achieve our goals, we devise personalized training plans for each athlete. We also have comprehensive support teams for them."

Many of the college's students begin their athletic journey in Zhejiang's renowned sports schools.

Changxing Youth Sports School in Changxing county in Huzhou, for example, has been the cradle of generations of Chinese Olympians, including volleyball star Zhou Suhong.

The school, which opened in 1974, offers students 13 sports to choose from, including athletics, volleyball, soccer, swimming, fencing and shooting. The student population is currently 300, with the school employing 38 sports coaches.

"I started to practice shooting when I was in seventh grade. At the very beginning, I knew nothing about the sport. I remember I wanted to go back home the first night when I arrived at the sports school," said Wang.

"Gradually, I fell in love with the sport. For most people, training every day can be very boring. The coach told us to think after each day's training. So I have developed a habit of noting down my feelings and thoughts after training each day. That's one of the reasons why I had my first taste of victory at the National Games."

For those that don't pursue careers as professional athletes, sports can be a route to a university education. Since 2019, 52 of the school's students have enrolled in universities across China, including some of the country's most prestigious institutions like Fudan and Tongji in Shanghai.