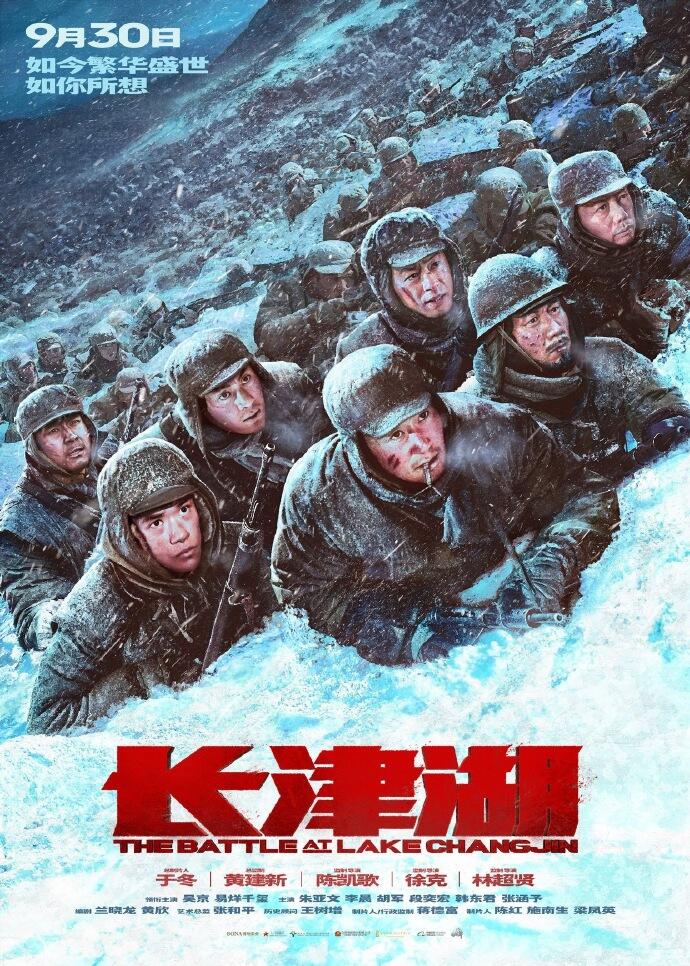 Poster of "The Battle at Lake Changin" (Photo/Maoyan Film)

China’s war-epic tentpole The Battle at Lake Changjin made an explosive opening grossing over 142 million RMB on its debut on Sept 30 and garnering more than 3.19 billion RMB taking up over 70% of China’s box office during the 7-day National holiday, one of China’s biggest box office windows of the year. Directed by Chen Kaige, Tsui Hark, and Dante Lam, three A-list Chinese film-makers, this historical film portrays Chinese People’s Volunteers (CPV) soldiers' bravery and sacrifices under extremely unfavorable conditions overcoming long odds to beat the most well-equipped US-led forces during the War to Resist US Aggression and Aid Korea (1950-53).

The film cost up to 1.3 billion RMB, involving more than 40 visual effects companies and 12,000 staff, shot for 467 days before the screenplay was polished for 5 years. It brought us back to the brutal war with fast-paced heavy-fire battle scenes between CPV soldiers and their American enemies. Although the running time is near three hours, many moviegoers expressed on social media that the immersive film made them even forget the time.

Amid the firebombs appears some heroic and also ordinary figures. They are heroes on the battlefield and safeguards of a nation. But they are also ordinary people who have daughters, brothers, and parents, who do fear death but not any longer when they know their nation and people are counting on them.

There are many impressive scenes in the movie. One scene featuring a soldier looking at his daughter’s photo saying "today we fight with our lives just to leave a war-free era for our children" touches many people. Another shot captures a veteran asking his brother to put his gun down after the commander of a US regiment falls, saying "sometimes we have to open fire, but sometimes we choose not," provoking deeper thinking about forgiveness and respect for human dignity. At the end of the film plays a moving scene that numerous CPV soldiers cloaked with thin cotton clothes are already frozen dead hiding in the snow while waiting for the enemies, but they are still keeping the gesture of ready-to-charge with guns firm in their hands. Seeing this, an American commander says in the film "fighting against men with such will, we are not ordained to win," which has evoked nationalistic pride in many viewers.

China’s Twitter-like Weibo has seen numerous hashtags related to this film coming among the top trending topics. Moviegoers enthusiastically expressed their feelings on the social media platform. Some posted pictures of children spontaneously saluting to the film before leaving the cinema. Some said they tried eating frozen potatoes to taste what it feels like for the CPV soldiers to make do with this food fighting with the most powerful US army in freezing temperatures. Others expressed their gratitude for the now hard-earned peaceful life with one filmgoer posting a picture showing a serene scene that looking from behind a gray-haired granny holding the hand of a little boy walking in the sun.

This blockbuster marks a major breakthrough in domestic filmmaking, shattering 11 Chinese film industry records. Chen Kaige, director and producer of the film on Oct 5 published an article on People’s Daily, an official newspaper of China, sharing his thoughts on producing a successful film. He said writing characters that come alive resonating with the audience is the key to shooting great films. Regarding this film, he talked about the efforts to shape a united and vigorous Chinese army and recognizable individual characters such as the two leads, tough veteran Wu Qianli and his brother Wu Wanli, who transformed in the film from a wild countryside teenager to a legendary soldier. He spoke of shooting on a day of minus 18 degrees Celsius in Beijing, the coldest since the winter came. Actors all wore thin clothes like the volunteer army with their hands turning stiff but they still played their roles earnestly with high spirits. The director said it was shooting in such freezing weather that made them realize that these predecessors were so courageous and determined. "We already felt the weather prohibitively cold after shooting for a day but our soldiers endured a whole winter!" he said.