In recent years, Zhejiang Province has adhered to the Double-Eight Strategy and made remarkable economic and social development progress. In 2020, Chinese president Xi proposed that Zhejiang strive to become "an important window for comprehensively demonstrating the strengths of socialism with Chinese characteristics in the new era" during his visit to Zhejiang, which provided new guidance for Zhejiang.

Why does the central government identify Zhejiang as the demonstration zone for building common prosperity? Zhejiang’s development is a microcosm of China's tremendous economic and social development achievements since the reform and opening up. In 1978, Zhejiang’s GDP was only 12.37 billion RMB yuan, while by 2020, it has reached 6461.3 billion, increasing about 520 times. In 2019, the GDP per capita had reached 10.7 thousand yuan, about eight times higher than in 2000. 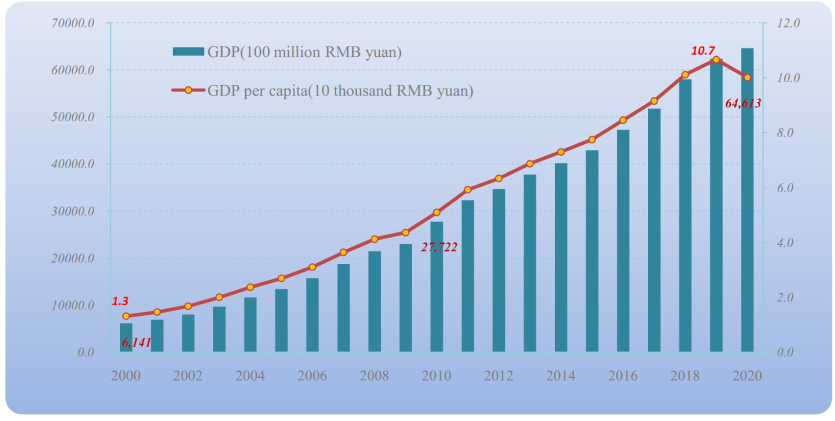 Note: The population size of Zhejiang has increased significantly according to the 7th national census (the sixth was conducted in 2010), making the GDP per capita in 2020 decrease slightly statistically.

According to official statistics in 2020, the ratio of the three industries in Zhejiang is 3.3: 40.9: 55.8, manifesting a service industry-dominated structure. In terms of foreign trade, Ningbo Zhoushan Port has a cargo throughput of 1.17 billion tons, ranking first globally for 12 consecutive years, and container throughput of 28.72 million TEUs, ranking third in the world for three straight years. As to the income, the annual per capita disposable income in Zhejiang was 52,397 yuan, 63% higher than the national’s 32,189 yuan.

What kind of demonstration significance does the common prosperity demonstration zone in Zhejiang have? Common prosperity itself is an essential goal of socialist modernization. The construction of a demonstration zone in Zhejiang is conducive to identifying breakthroughs in promoting common prosperity at the provincial level and “creating an important window for comprehensively demonstrating the superiority of the socialist system with Chinese characteristics in a new era.” In 2020, China built a moderately prosperous society in an all-around way, achieved its first centenary goal, gained a decisive victory in poverty alleviation, and lifted 770 million rural poor people out of poverty. In 2021, China entered a new journey of striving to realize socialist modernization comprehensively. In this background, the demonstration zone could improve the income distribution and narrow the urban-rural, income, and regional gap. It will finally demonstrate the superiority of socialism with Chinese characteristics.

In what ways does Zhejiang achieve high-quality development and build a common prosperity demonstration zone? There are six major tasks faced in the present, namely, consolidating the material foundation, deepening the income distribution reform, narrowing the gap between urban and rural areas, enriching the people’s spiritual and cultural life, building a livable beautiful living environment, and creating a comfortable society circumstance. In response to these tasks, the government also put forward twenty specific measures, which clarified the direction of the demonstration zone from the aspects such as innovation, income distribution, public service, social security. Meanwhile, it also described the beautiful blueprint of Zhejiang.