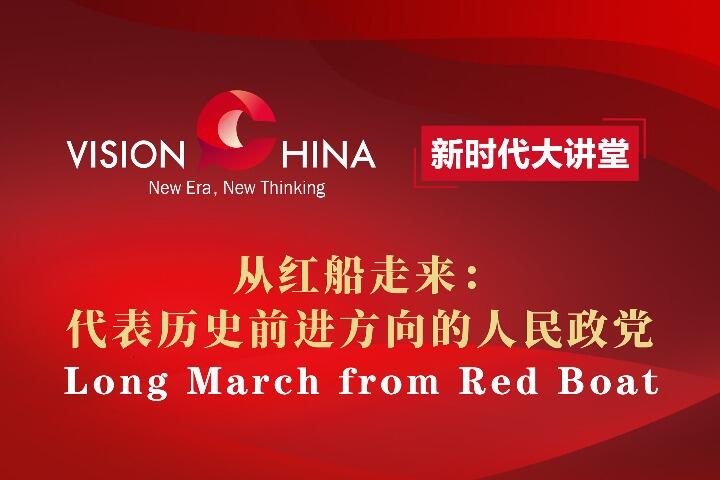 On June 20, the "Vision China" Event, a flagship global communication event organized by China Daily just kicked off its latest session themed "Long March from Red Boat" in Jiaxing, East China's Zhejiang Province, to mark the 100th anniversary of the founding of the Communist Party of China.

Officials and global observers underlined the importance of understanding the Communist Party of China, especially its history, after the Party led the Chinese people to achieve unprecedented success in various fields, including COVID-19 control and poverty alleviation, during its centennial journey.

Zhu Guoxian, head of the Publicity Department of the CPC Zhejiang Provincial Committee, said the Party has stood the test of history over the past 100 years and has written a spectacular chapter in the development of the Chinese nation and progress of human society.

The fact that the Party has grown from a small party of some 50 members into the world's largest ruling party with more than 91 million members, shows the advanced nature of the CPC, Zhu said.

In 1921, the CPC's founders convened the first National Congress of the CPC and announced the Party's founding on a small boat, which was later referred as the Red Boat, on Nanhu Lake in Jiaxing.

Sunday's event with the theme, "Long March from the Red Boat", was held 10 days ahead of the 100th anniversary of the CPC's founding.

Zhou Shuchun, publisher and editor-in-chief of China Daily, said it was a move to look back at the Party's history and forward to the future.

Starting from Jiaxing, the CPC has been uniting and leading people on a great journey through brambles and thorns to save and revitalize the Chinese nation, he said.

"To understand today's CPC, we need to start from the Red Boat again. Without the CPC, there would be no new China, and one cannot read and understand China without knowing and understanding the CPC," Zhou said.

Zhang Bing, Party secretary of the CPC Jiaxing Municipal Committee, said since its start from the Red Boat, the CPC has remained committed to seeking happiness for the people and pursuing rejuvenation for the nation.

Now Jiaxing, which has achieved remarkable social and economic progress over the past years, is also an important window to observe and understand China's development and the Party's vitality in the new era, he said.

In a video speech at the event, Marcos Cordeiro Pires, a professor at the Political Economy Institute of São Paulo State University of Brazil, said the CPC has experienced a long journey marked by "many sacrifices, much struggle, and many achievements".

Few countries have managed to overcome scientific and technological backwardness and match the world's greatest powers like China, he said, mentioning the country's progress in space exploration, 5G and artificial intelligence technologies.

Pires said the determination and resilience of the Chinese people and the leadership of the CPC are the reasons for China's achievements.

"The Red Boat sailed with the Chinese people down its revolutionary path, equipped them with a powerful spiritual force that has helped to make China achieve remarkable progress, overcome challenges and defeat dangers and to achieve the impossible," said Gert Johannes Grobler, former senior diplomat at the South African Department of International Relations and Cooperation.

The CPC ensured the Chinese people have truly become the masters of their country and have taken control of their destiny, he said.

According to Grobler, with its successful growth path, China is also a potential role model for African countries to explore development models that suit their own national conditions.

Martin Jacques, former senior fellow of Politics and International Studies at Cambridge University, said in his video speech that the West does not understand China because the West, having dominated the world for 200 years, believes that ultimately it's the destiny of every society to adopt the Western model.

But the reality is that the CPC is the most successful political party of modern times, he said.

Jacques also listed in his speech other reasons behind the CPC's success, including a great deal of support from the Chinese people, its extraordinary reforming capacity, and concern about State competence.

He advised the West to try to study the CPC "instead of demonizing it for propaganda purposes".

Erik Nilsson, a senior journalist at China Daily, said he has witnessed that success from the front lines of superlative transformation across every corner of the vast nation after traveling to every province on the Chinese mainland over the past 15 years.

"Indeed, these experiences covering China have helped me to understand how China is performing many miracles and the role of the CPC in leading the country to advance in many ways and speeds that are unparalleled in human history," he said.

Robert Kuhn, chairman of the Kuhn Foundation, stressed in his video speech that those who recognize China's unprecedented success in both COVID-19 pandemic control and poverty alleviation must also recognize its direct relationship to overall Party leadership.

Earlier this month, the central authorities issued a guideline on building Zhejiang into a demonstration zone for achieving common prosperity.

Peter Morgan, associate dean of the Business School of the University of Nottingham Ningbo, said he witnessed how the Chinese people, under the guidance of the CPC, took prompt action to deal with the novel coronavirus after he flew back to China from the United Kingdom last year, finally making it on a third flight after two previous flights were cancelled.

"I witnessed that China had become one of the safest places to be," he said, noting that the Party is accountable to the people of China and dedicated to their needs.

Launched in 2018 by China Daily, "Vision China" invites political, business and academic speakers to tell China's story from a global perspective and discuss major China-related topics of international interest. Prior to this event, the talks had been held 19 times in places like Beijing, New York and London.