It Is the Time of Youth and Vitality: The rise of refocus on cultural practice and civilization

If classical or traditional art is still alive, how the professionals study in culture and history would pick to perform today is an interesting project.

Varieties of lifestyles, great fortune owns by people and great ecological environment in Zhejiang are the topics for the research on modern national governance. Lately, the topics have been transmitted into a touchable exhibition named “It Is the Time of Youth and Vitality” by Zhejiang Research Institute of Culture and History, Zhejiang Chinese Painting Institute and CNS Zhejiang, which launched on June 3rd. The exhibition weaves the 100-years Zhejiang history with the classical artworks, to tell a brand new story on Zhejiang People’s cultural act and courage since early 20th century, to celebrate the 100th birthday of Communist Party of China, to memorize the martyrs who devoted their lives for today.

It could be seen beneath the surface of the classical art, such as Chinese painting, calligraphy, seal cutting, prints, wood carving, stone carving, copper casting, celadon, etc., which nowadays are recognized as epics of Chinese  art fields in the world. The artist Zhuo Hejun is the master of landscape painting, who has painted 10 pine trees in a modern way. The Chinese used to enjoy the old pine tree in a curved gesture, which fit the aesthetics of ancient Chinese. But Zhuo put 10 straight and high pine trees to show his knowing on the Chinese people’ spirit in the recent 100 years, standing in an upright and straight gesture, and their life’s full of youth and Vitality, which reflects the changes in Chinese literal’s athletics.

The energy also roots in the figure paintings. The exhibition picked over 50 pieces to show the varieties approach to perform the Chinese today. For this part, it is a library in the shape conversation table to symbolize a dialogues between now and half century, even a century ago. The face expression and body gesture emanating from generations’ practice and exploration on portraying the Chinese life, their job, their resting time, forgathering in the street, the farmers’ early morning in the fields…, Chinese painting might be the great challenge for portraying modern people by classical brush. The Chinese spiritual matters include compassion, empathy, to live and create a society and life by practice is a thousand years path, it evoked a village seen dimly in the midnight, then to create the possibility to achieve that all people obtain good life together, which requires modern governance and the inclusive attitude. Already in the mid-twentieth century, artists who are good at flowers and birds included more plants in the painting. Ancient Chinese used to love the topics of plum blossom, orchid, bamboo and chrysanthemum, which express one person’s noble moral. But we can see new flowers and weeds much more than ever before, sunflowers, trumpet creeper, honeysuckle, etc, which reflects the acceptance of Chinese literal is wider which include the phenomenon on natural and concrete contemporary life. 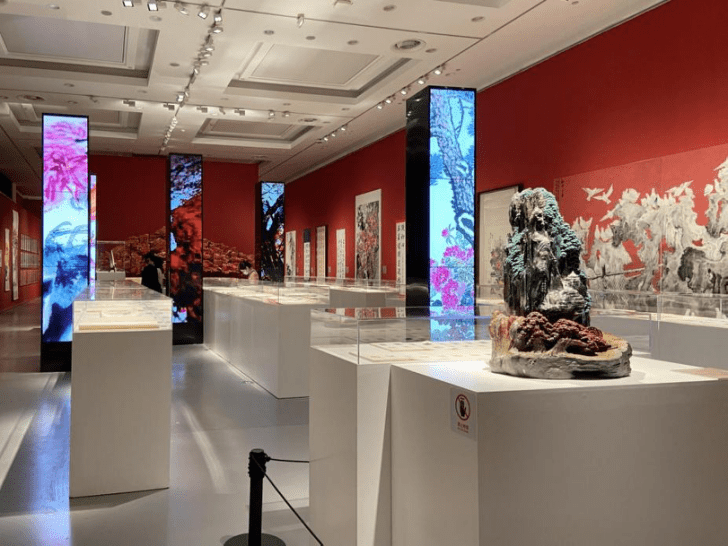 However, for the foreign audience, they’re still Chinese paining, the abstract brushes and old-school. To evoke the cognition of young generation of Chinese and those unfamiliar audience, the curatorial team also create a multimedia installation to strengthen the specialties of Chinese art. There are 5 screen pillars in the space, which enlarge the works which seems simple, but full with detail, subtle, gradations matters, the audience are astonished by the splendid spiritual world by a square meter paper and ink. Though tool is tool, which also manifest the practitioner’ ideal, the result it come out would enable each person who live to be physically in the nowadays, but carrying the gene from thousands years ago.

As for the kindness of the exhibition want to show, we could see how the Chinese came along till today, both the inner attitude and real practice; we could also grab the details of contemporary life now Chinese have, they still keeps the gentle morals, but with new enterprise and initiative in their concrete act, both the moral and real practice spread and root in each inch of the land of Zhejiang, the leading province in socialist modernization progress.

“It Is the Time of Youth and Vitality” helps us refocus on the living and social thoughts of the pioneering area of China, which is an important window for outside world to see through. It reveals the civilization with the cultural practice in Zhejiang，as an outstanding channel to the world, a demonstration area of common prosperity.

22669502
It Is the Time of Youth and Vitality: The rise of refocus on cultural practice and civilization
19560
NEWS
新闻