Focus | How did China achieve zero extreme poverty 10 years ahead of schedule?

China on Thursday declared a "complete victory" to its battle against extreme poverty, with 98.99 million rural impoverished citizens lifted above a government-defined poverty line on annual per-capita income. That is a key indication that the country has managed to usher in a moderately prosperous society in all respects on schedule.

That is 10 years earlier than the world's most populous country's plan to realize the goals of the United Nations 2030 Agenda for Sustainable Development, according to Chinese President Xi Jinping. The achievement was made in the same year when the Communist Party of China (CPC) celebrates the centenary since its founding. "This is the great glory for the Chinese people, the CPC, and our nation!" Xi said at a gathering to mark the country's accomplishments in extreme poverty eradication and commend role models in that cause, hailing the achievement as "a miracle on earth that should be written into the history."

The event was held at the Great Hall of the People in the capital Beijing Thursday morning.

The start was not easy.

While in his 30s, Xi was sent down to work in the early 1980s as a grassroots-level official in Zhengding County, northern Hebei Province in the country's call for large-scale poverty relief programs. There he started his reform experiments: rural land contracts. He then later became a secretary of the prefectural Party committee in Ningde, southeastern Fujian Province.

"I always felt a sense of unease," Xi recalled in his book "Up and Out of Poverty." "Poverty alleviation is an immense undertaking that requires the efforts of several generations."

Over the next two decades, he brought his dream of poverty elimination to the center of China's political life.

"Xi's reform is derived from his experience," said Shi Zhihong, a former deputy director of the Policy Research Office of the CPC Central Committee. "He knew that the rigid old paths would lead nowhere, and reform was a must." 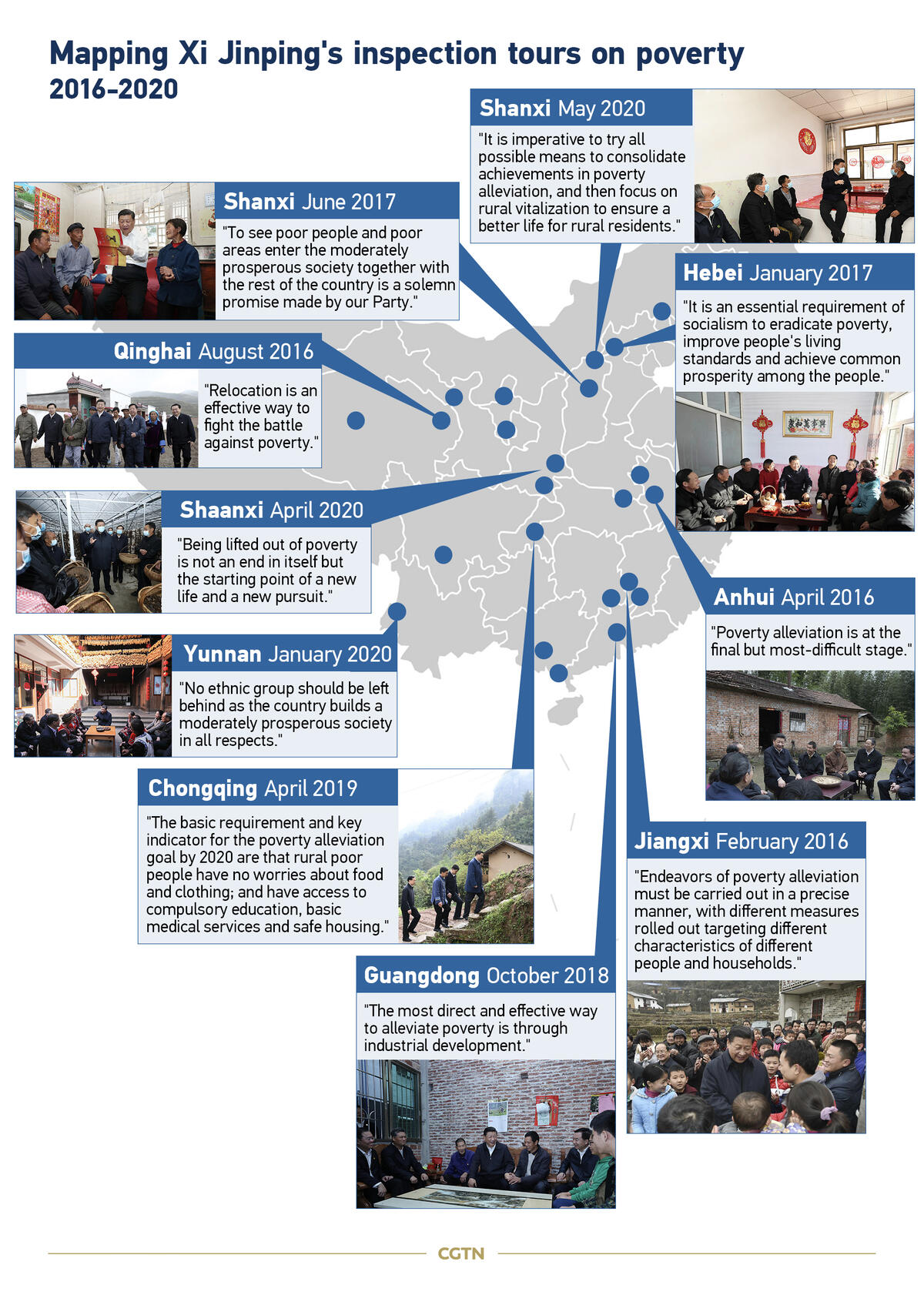 Since 2012, the Chinese president has gone down deep traveling to impoverished communities more than 50 times and learned about people's lives.

Tailored measures based on practical situations

Precision was a key to China's success. The strategy of targeted poverty alleviation was put forward by Xi in late 2013, who compared adopting indiscriminate approaches to "killing fleas with a hand-grenade."

Xi called it "the poverty eradication path featuring Chinese characteristics" in his Thursday speech. From household to household, the questions of who exactly needs help, who should provide help, how help should be rendered, and what standards and procedures should be adopted for exiting poverty were answered.

To take a step further, the central government has also sent millions of city officials to the frontline — going down to the poorest grassroots and work with individuals in difficult physical circumstances.

"So, again how can China eradicate absolute poverty? It's because of the ruling party's philosophy, the goal of common prosperity," Zheng Yongnian, dean of the Advanced Institute of Global and Contemporary China Studies at the Chinese University of Hong Kong, Shenzhen, told CGTN.

Rural infrastructure, education, and healthcare all improved. Official data shows over 9.6 million people moved out of their tiny mud-brick houses that may pose safety concerns. Some rural hospitals partnered with their metropolitan counterparts to offer high-quality medical services to rural residents.

"Illness-induced poverty is one of the toughest problems in rural areas," said Hu Yi, head of the public hospital in the county of Zhenxiong in Yunnan Province. "Now they don't have to travel far to get treated, not even for serious illness."

Beijing now aims for more on top of consolidating its already-reached results. It has set goals at achieving the basic modernization of agriculture and rural areas by 2035, and the grand goal of a strong agricultural industry, beautiful countryside, and well-off farmers by 2050.

A term was raised: rural vitalization. For those villages that agriculture products that are sold solely within their vicinity, their markets are wide now thanks to fast-developing e-commerce service.

Luo Huimin, a native from Wannian County of Jiangxi Province, analyzed the demands for agricultural products in cities and optimized the supply of agricultural products. He now opens chain stores delivering crops and oil for residents across the country – from Nanchang, the provincial capital of Jiangxi, all the way to southern Guangdong Province.

According to a survey among 3,378 migrant workers conducted in early 2019, more than 60 percent of respondents said they believe improving public resources such as health, education and infrastructure are convincing them to stay in the countryside or return from the coastal areas.

The difficulties in rural revitalization are no less than eradicating extreme poverty, Xi said in Thursday's speech. "But we'll maintain the hard-working momentum and continue to march forward!"