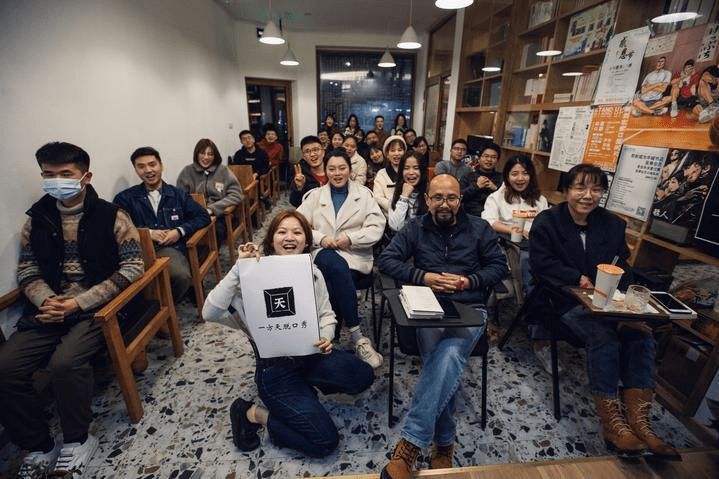 Song Hongye, a 26-year-old girl, would drive back to her hometown of Shaoxing from Hangzhou on weekends when she was free to organize a talk show. More than 30 young people will gather in a small room of about 20 square meters.

They come from all walks of life, some are lawyers, some are teachers, but when they pick up the microphone, everyone is a shining protagonist on the stage, even though some are still nervous.

Apart from intense work, they strive to make themselves humorous and colorful.

Variety shows such as "Tucao Conference" and "Talk Show Conference" are becoming more and more popular among audiences. This trend has now spread to Shaoxing. In a bookstore next to Lu Xun's residence, a group of young people from Shaoxing started their talk show.

Song Hongye works in an advertising company in Hangzhou. She was born and raised in Shaoxing. She studied broadcasting and hosting at Zhejiang Media College and has graduated in more than two years. There are also some open mics in Hangzhou, and they are already quite developed with many clubs as strong support. Song Hongye went to sign up and tried a few times, and she felt pretty good. Fang Tian, her friend in Shaoxing, a storytelling actor, told Song Hongye that he had rented a venue, and if she was interested, she could come together for a talk show.

Song agreed without hesitation. In this way, it became Shaoxing's first open mic to do offline talk shows. Open mic is a kind of practice place for talk shows, which is different from formal performances. Open mic is more inclined to provide a place to practice and polish the jokes. Newcomers can bring the first show of the talk show on the open wheat scene, and gradually improve their level, and professional talk show actors can also practice their newly written jokes here.

The first talk show was finally scheduled for November 14.

Two days before the lecture, Song Hongye made a poster advertisement and posted it in Moments. She didn't dare to publicize it on a large scale, instead just told some friends around her, "I don't know what to do, I'm afraid it will be messed up."

Unexpectedly, some people still followed and forwarded it. A few days later, more than 40 people signed up. Song Hongye knew most of these people, and many of them came to warm up the atmosphere.

The first show started, and only Song Hongye and Fang Tian were on stage. Everyone was here to listen. However, thanks to the storytelling actor Fang Tian as a finale, he talked for forty minutes fluently. After all, the professional is different in that he made everyone roar in laughter. Finally, an unfamiliar man came onto the stage, and he said a few words, hoping that everyone would talk together and let go of their guts.

Although many people did not take the stage, everyone found it very interesting.

Two weeks later, the second show was there. Within two days, the tickets were sold out. A total of 30 tickets were sold for 20 yuan each. There is a bookstore next door, and some people who read books will come to participate halfway through, so they have to leave 5 tickets for them. The old place, old time, young people are here again. This time, Song Hongye found many strange faces.

In this second performance, Fang Tian did not appear, instead, newcomers came on stage. There is a total of 5 young people on the stage, all of whom have registered for the stage by themselves, and they are all on their first attempts.

The first to step onto the stage was the radio anchor Yang Siyu, who was professionally trained, shared his experience in traditional media. He also used a humorous way to interpret the impact of new media on traditional media and the changes in people's lives.

Liang Shuxian, a Shaoxing girl working in engineering management in Hangzhou, is a particularly humorous person in real life. She is Song Hongye's best friend. "I'm going to talk on the stage too." She told Song Hongye. During the show, she shared some interesting things that happened in her identity conversion from Party B to Party A in engineering projects, and some life experiences related to marriage and love.

"Romantic relationship is not allowed in college years, yet I want to hug my grandson as soon as you graduate from it-this is how my parents think." As soon as she said this, many girls on the scene laughed.

28-year-old Yang, who has been a teacher, shared many things that happened in school. His eloquent narration reminded everyone of their school days in laughter.

What made Song Hongye most memorable was a young man named Zheng Ye. He is less talkative in life and is afraid to speak on stage. He wants a breakthrough in this opportunity. That day, he came to the scene early with pre-edited jokes on his mobile phone, while copying the key points in his hand with a pen. "Extremely nervous, but also very interesting." He said that in order to make a decent appearance on this talk show, he also made a special trip to Hangzhou to watch an offline talk show.

Among the audience at the scene, there was also a temporary talk on stage. A middle-aged uncle took the stage temporarily and gave a speech. That day, the weather was a bit hot, he was dressed a little too thick for it, so he was sweating all the time. Song Hongye said, why don't you take off your clothes and talk? He answered immediately: I came for a talk show, not a strip show.

This sudden humor caused a burst of laughter in the audience.

"To put it bluntly, open mic is to encourage newcomers. As long as you have the courage to take the stage, no matter what you say, it is worth trying." Song Hongye said.

"After performing two or three times, the audience will give you feedback, such as telling you why it is not funny enough." Song Hongye admitted frankly that she is still at the novice stage. "Speaking of talk shows, you must be relaxed enough. When you are nervous, the audience will not be able to laugh. In that case, no matter how good the story is, the whole paragraph will collapse." Song Hongye said.

Song Hongye hopes that through persistence, a circle will be formed in Shaoxing so that young people who love to and is able to talk can have a stage. "We wish to slowly enter the normalized performance." She said.

"For urban office workers with a tight work rhythm, participating in the open mic is actually a very good way to relieve stress. Many annoying things will be encountered in life and work, use a humorous way to complain, smile, and then you are relaxed. That's it." Song Hongye said.