The year 2020 marks the tenth anniversary of Ruian's "Chinese movable type printing" being selected as a UNESCO Intangible Cultural Heritage List for its implementation practice. There is a photographer in Ruian City. He has traveled to more than 60 places in southern Zhejiang and northern Fujian for 18 years and traveled more than 10,000 kilometers. He used pictures to record the history of Ruian City's wood movable type printing and witnessed the gratifying changes after it was selected for the United Nations Intangible Cultural List ten years ago.

In the home of photographer Wu Xiaohuai, the reporter saw this thick book of Ruian wood movable type image. When he opened the book, photographs engraved with the years came into view. Wu Xiaohuai introduced the stories behind these images to reporters. 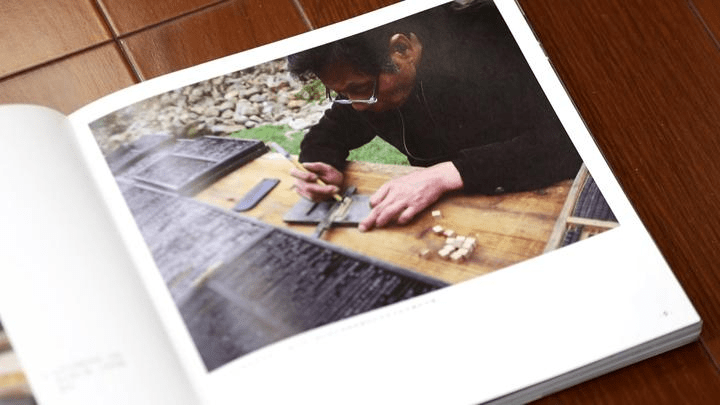 In 2002, by chance, in Dongyuan Village, Pingyangkeng Town, he came into contact with the printing technique of movable type and was deeply attracted by this living fossil in the history of printing in China and the world. He made a bold decision to record these precious memories with a camera and words.

For longer than a decade, he followed the traces of the "Cultivation Genealogy" of the wood type craftsman of Dongyuan Village, visited more than 60 places in southern Zhejiang and northern Fujian, traveled more than 10,000 kilometers, and interviewed more than 100 inheritors of wood type printing skills. More than 10,000 photos were taken, and they were finally assembled into the "Limo Spring and Autumn" Ruian wood movable type print image.

"I have been engaged in and following the wood type printing for 18 years, and I have seen earth-shaking changes. The stability and growth of the team, originally there were only about ten inheritors, now there are more than a dozen young inheritors joining the wood type industry after passing the entrance assessment test of movable type skills so that the new successors and the old inheritors can work together to solve the problem of passing down the skill." Wu Xiaohuai, 68, is a member of the Chinese Photographers Association, the honorary chairman of the Ruian Photographers Association, and a scholar of folk culture. He has always been interested in Chinese traditional culture. Wu Xiaohuai is not only a recorder but also a witness to the wood movable type printing skills of Dongyuan Village, Ruian City.

In order to protect and inherit this "list of intangible cultural heritage that urgently needs to be protected", in the past ten years, Rui'an City has issued non-genetic inheritance policies and invested more than 16 million yuan in protection. Up to now, there are 240 social production practitioners directly involved in the project in Rui'an, an increase of 130 compared with five years ago, of which 23 are women.

The number of inheritors who have mastered the complete set of skills of wood movable type printing has also increased from 15 to more than 30 now. In the series of activities for the 10th anniversary of the implementation of the “Chinese movable type printing” on the World Intangible Cultural Heritage List, Ruian City also signed a contract with two social enterprises to introduce social capital to create a characteristic industry of movable type cultural tourism and help realize the economic value transformation of movable type printing.