Featured | Till death do us part: a story of to have and to hold in paralysis

On the evening of December 2, 63-year-old Zhu Xiaoguo from Tiangu Village, Jiulonghu Town, Zhenhai, gently hummed old songs in his wife Zhu Xuezhen's ears as usual. In the past three years, this has become a habit of Zhu Xiaoguo, and it is also a way for him to communicate with his paralyzed wife.

More than 30 years ago, Zhu Xiaoguo was introduced by mutual acquittance to Zhu Xuezhen from the same village. When the two got married, they did not have a decent piece of furniture in the home, but with their diligent hands, they worked for hand in hand and their lives slowly moved forward. 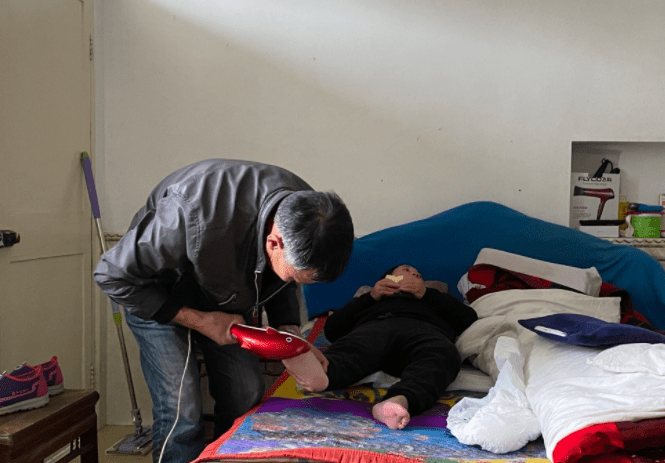 "My son worked abroad after getting a master's degree, and now he is married and has his own children. Our pension combined is more than 3,400 yuan. Originally, our family was very happy, but I didn't expect that my wife would get this disease. Alas..." Three years Previously, Zhu Xuezhen was unfortunately diagnosed with Alzheimer's. At that time, the doctor told Zhu Xiaoguo that the younger the person is, the faster the disease will get worse.

"In order to treat this disease, we ran to major hospitals in Ningbo, and also went abroad to treat it, but still nothing improved." Zhu Xiaoguo watched his wife's condition worsening step by step, but could do nothing, his heart ached as if it was stabbed by a knife. At the beginning of the illness, Zhu Xuezhen just couldn't take care of herself. Fortunately, she could walk on her own, but misfortunes did not come singly. When she went upstairs one day, Zhu Xuezhen accidentally rolled down the stairs. She had several broken ribs and lay in the hospital for more than 5 months. Since then, she has been paralyzed in bed and can no longer stand up.

"I didn't take care of her. If she didn't fall downstairs, the situation wouldn't be so bad." Zhu Xiaoguo always had a regret about his "negligence" that one time, and he became his wife's hands and feet, putting on clothes, wiping her body, feeding her...Zhu Xiaoguo took care of his wife with extreme care. Hearing that foot massage can stimulate the cerebellum, Zhu Xiaoguo bought a massager to do foot massage for her every day. In order to avoid sores, Zhu Xiaoguo wakes up four or five times every night to help his wife turn over.

"When I went out to buy food, I walked hurriedly, for fear that she would shed tears after I leave too long." Zhu Xiaoguo said, even when he was unwell, he still dragged himself to take care of his wife, and once even fainted at home. Fortunately, the neighbors found him in time and sent him to the hospital. During the hospitalization, he couldn't rest, worried that the nanny could not take care of his wife. He was discharged from the hospital and go home early before he fully recovered on his request, just to be with his wife.

For three years, he thought of ways to make his wife better. In order to reduce his wife’s misery, in addition to caring day after day, he also seeks medical advice and buys supplements. With his attentive company and care, his wife’s illness has also improved recently, her eyes and hands have become more movable.

After lunch break every day, Zhu Xiaoguo took his wife to practice walking. He embraced his wife with both hands and let his wife’s feet step on his feet. The two feet overlapped each other. In this way, Zhu Xiaoguo’s big feet supported his wife’s little feet, slowly marching step by step.

"She has suffered most of her life for this family. As a husband, it is the responsibility to take care of her wife. No matter what she becomes, I am her husband and relative. As long as she lives, I will always be with her."