Warmth in the chilly wind: A road full of love and care

In the past few days, the temperature in Hangzhou has continued to drop, and more and more people have felt the cold in winter. However, the merchants near Tiancheng Road in Jianggan District did a super warm thing—invite the deliverymen and sanitation workers to come and rest!

This is the charity activity "Stores along the street provide refuge for sanitation workers and deliverymen", recently launched by Lantian Community, Zhalongkou Street, Jianggan District.

"Within less than a week of the initiative, eight shops responded." A staff member of the Lantian community told reporters that some of these shops provide boiling water and medicines, some offer discounts on meals, and some provide toilets.

At the entrance of the store, the reporter saw a poster full of words, targeting takeaways and sanitation workers. In addition to providing a resting place, it also provides a 6.9% discount for charging and dining.

Compared with the cold outside, the store is significantly warmer because of the air conditioning. After 9 o'clock in the morning, breakfast was served at the stall, and many nearby residents were still eating. Looking around for a week, the reporter found that in addition to the posters and small blackboards at the door, posters of "Charity Activities" were posted in many places in the store. 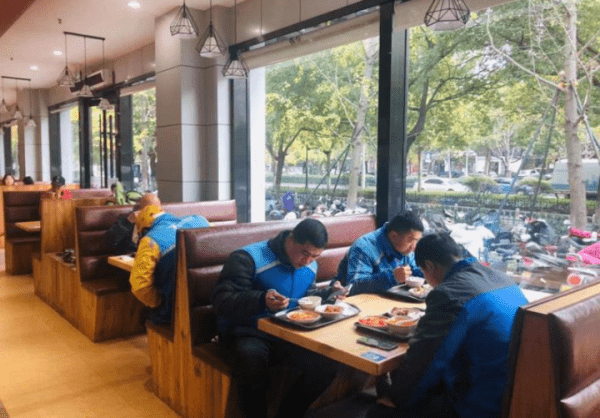 Deliverymen having a warm meal in the store

At around 11:30, Xiao Han, the first deliveryman who arrived at the store, appeared. He had already run 4 orders this morning.

"The heating is adequate today." While waiting for the meal, Xiao Han unbuttoned his jacket and chatted with the store manager.

"I mainly run orders nearby." Xiao Han has been a takeaway for more than a year. He originally ate at some cheap shops on the side of the road. "If you can save a little, you will save a little."

In May of last year, Xiao Han received an order from here. Seeing a notice posted here, he curiously asked "Is there a discount?" The clerk said yes. After the order was delivered that day, Xiao Han had a try and came here for dinner. "Very cheap, a meal with a meat dish and two vegetable dishes, is about 15 yuan."

From then on, as long as he is not far away, Xiao Han will come here to eat. In addition to eating, he can charge his mobile phone for free.

"The only regret is that we can't recharge the battery for the bottle car. They need to find a way by themselves." The manager sighed. Xiao Han smiled, "It’s okay, you guys are already thoughtful enough."

After taking the customer's takeaway, Xiao Han greeted the store manager, wrapped his coat tightly, and continued to deliver the takeaway.

Speaking of why such a charity event was initiated, Wang Lina, the general manager of the store, said: "Deliverymen are our partner." Soon after it opened in 2018, the store built its takeaway business.

"We saw that the deliverymen worked hard regardless of the weather, and it was no easy task. So we decided to provide a 31% off meal service for them as well as for the sanitation workers." In 2019, the discount was extended to soldiers, civilian police, and firefighters, and this year Medical staff are also included.

"At the beginning, we put a notice at the entrance of the store, because the deliverymen are in a hurry and rarely pay attention, so we added a notice at the pick-up spot of take-out meals."

Two years later, there are quite a few deliverymen who come to the store to eat and rest. "Many people have become friends with the employees in the store."

Today, charity activities have expanded to the entire community. Wang Lina said: "This is an affirmation and support for us, and we will continue to do it in the future. We will do it as long as the store is open." She also introduced that the restaurant recently opened a branch and the same activity is also provided there. “We will extend our charity activities to every branch in the future."

Merchants currently participating in public welfare activities provide sanitation workers and deliverymen with services within their capabilities. For example, a nearby drugstore says, "Provide band-aids and disinfectant." The clerk told reporters: "They are working outdoors, and it is inevitable that they will bump into something. We hope that they can protect themselves while working." 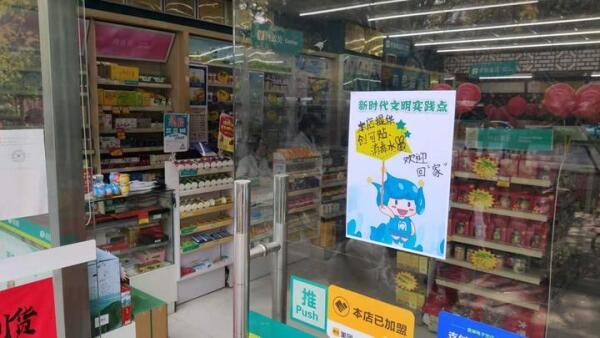 In addition to the currently participating 8 stores, many business owners have expressed their willingness to join the event. During the interview, community workers ran into the owner of a shop on the street. After a short communication, this shop became the ninth service point in the community, providing services such as hot water and rest spots for sanitation workers and deliverymen.