40 times speed, 60 times speed, 80 times speed...On the computer screen, lines of text are rapidly forwarded by the voice broadcast software into a vague, noisy, and even harsh sound.

Ordinary people can hardly find familiar character tones in a string of sounds. But in the entrepreneurial incubation base for young (college students) in Xiaoshan District, Hangzhou, a group of people can not only easily hear and understand the sound of playing 30 characters at dozens of times in 10 seconds. At the moment of hearing, their fingers are already Netizens' questions after tapping to reply to the screen.

They are a work team that helps the visually impaired in diversified employment—"Black Joy Social Enterprise". One of the employment directions for training is cloud customer service.

They are closely related to us.

When we were shopping on Taobao during Double Eleven, they were part of the most contacted Alibaba Xiaomi Cloud customer service. They can't even see the text on the screen. They are a group of visually impaired people who can only rely on faster hearing to replace their eyes.

Recently, journalists walked in here and approached the persistence and dreams of these cloud customer service staff.

From the outside, Qin Rui looked like every young girl with long black hair and plump cheeks. The only difference is that she has big beautiful but out of focus eyes.

"I was like this when I was born. Compared to being completely blind, I have slight light perception, but most of the things I can't see clearly." Qin Rui from Guiyang, Guizhou, said generously and confidently. It is one of the benefits that working as a cloud customer service training lecturer has brought her.

When she was a child, Qin Rui went to a school for the blind in Guizhou. In addition to learning Braille, an important part of the school is vocational skill training. But Qin Rui didn't like the content of the training, "It is the message that everyone is most familiar with. But I’m not quite suitable for this since I don’t have enough strength in my hands, also, it’s not my ideal career.”

In 2014, Qin Rui graduated from a vocational college in Guizhou. She didn't want to be a blind masseur. After a period of confusion, Qin Rui, like most young people with good education, wanted to change her own destiny. She ran from Guizhou to Beijing alone, "I heard that Beijing had customer service industry training at the time." Qin Rui wanted to try it. Beijing has a high degree of acceptance. Qin Rui has been a visually impaired customer service for ordinary companies for more than two years.

At the beginning of March this year, Qin Rui overheard the news of the recruitment of cloud customer service by the "Black Joy Social Enterprise". This girl, who refused to admit defeat or admit her fate, once again gave up the already stable micro-shop business and came to Hangzhou alone.

After 10 seconds, more than 30 characters have been read. This is the effect of voice playback on the computer screen at 40 times speed. A large string of words transforms into sharp, swift notes of a few seconds, and it is difficult to distinguish words in the mixture. It took Qin Rui for more than a month to adapt to this situation.

Why read every line of words on the screen at such high speed?

The working hours of cloud customer service are free. So long as you can guarantee to go online for 6 hours out of 24 hours a day, then you can choose your own working time. But at the same time, it is very demanding. It eliminates a batch of unqualified personnel every month, and when a service staff does not respond to netizens' questions within 2 minutes, it is also considered as an incompetent performance.

"No one will wait for you." Qin Rui said that if the visually impaired people want to observe the world with their eyes like ordinary people, they must exercise their hearing to the extent that they can receive information within a few seconds. "Replacing eyes with ears is what high speed brings us."

"In the beginning, I was not familiar with the business. I had to respond to several netizens at the same time. The record was to respond to the questions of 5 netizens at the same time." Qin Rui is responsible for account customer service. The most common problems include malfunction of consumer accounts and change of mobile phone numbers. She set up a group of commonly-used words, keywords in the group can pop up in a few seconds, and instantly send out to respond to multiple questions.

After training, Qin Rui was able to tap the content of the answer with her fingers while confiding a few notes. 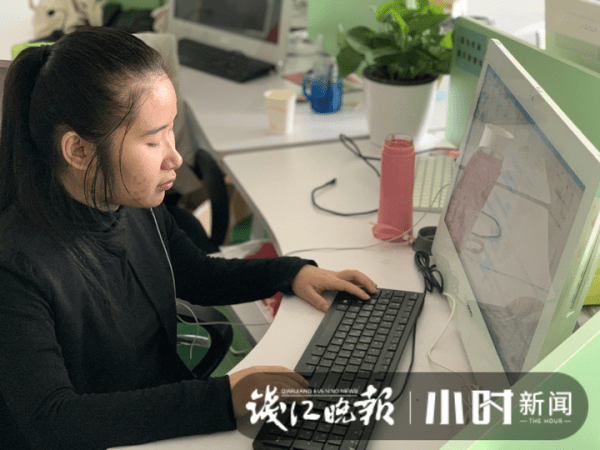 The content of the response should also be well thought out. Like during Double Eleven promotion, there are many rules. First of all, customer service must fully understand the operation of the rules. If you falsely explain them to the merchants, it may cause millions of losses. "Transfer rate, customer satisfaction, positive and negative reviews, one-time resolution rate, etc., are all assessment content of cloud customer service."

Qin Rui said that compared to the slow life at home before, she felt that the time in "Black Joy" passed quickly. This feeling stems from the fact that more and more life information is being received by Qin Rui more quickly.

The work of cloud customer service is challenging, and Qin Rui also works part-time as a training lecturer. She enjoys this feeling of fulfillment. "At “Black Joy”, you can feel that you explore more projects. Compared with a few years ago, there are more and more visually impaired friends who walk out of homes and massage rooms to make career changes. "

During Double Eleven this year, more than 200 visually impaired cloud customer service personnel participated in the "big test", incarnate as Ali Xiaomi through the screen, explained the rules to the merchants, calculated coupons for netizens, broke one minute into two to accomplish their task, completed this national show in cooperation with others.

Cai Congqu was more excited than anyone else to pass the big test. He is a slightly visually impaired person, able to see the outline a hundred meters away, and his weak vision is almost entirely supported by his right eye. He also has another identity, the founder of Black Joy Social Enterprise.

Born in Quanzhou, Fujian in 1991, Cai Congqu spent most of his childhood in Quanzhou special schools.

“At that time the visual aid was firstly entering school, I used the magnification function of the handheld electronic screen to familiarize myself with the meaning of each Chinese character.” After more than half a year, Cai Congqu knew some commonly used characters, but couldn’t write them. “I understand the meaning of each word, but I can’t write it by myself. Braille is far from enough. For example, when you go to a new place and don’t know Chinese characters, you may not even know the signpost. This is the reason why I must learn Chinese characters."

At the beginning of 2014, in the undergraduate innovation and entrepreneurship project, Cai Congqu and his small team's dark space experience project took shape.

In 2017, Black Joy Culture Communication Co., Ltd. was established, dedicated to training so that more visually impaired groups can have a richer and diversified professional experience. the customer services busily replying to Netizens during "Double Eleven"

For the future, Cai Congqu has his own plan. He hopes that more people can learn about Black Joy and that within a few years, more visually impaired people will be exposed to various occupations.