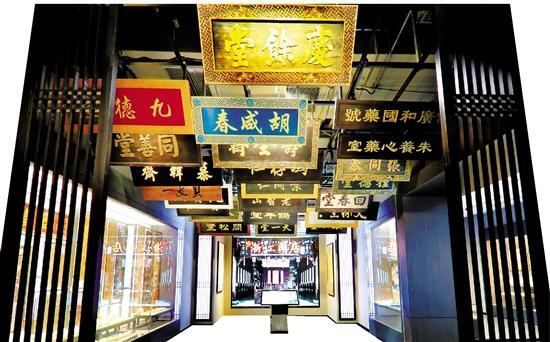 In front of the clear glass window, the ancient Chinese books recount the profoundness of traditional Chinese medicine silently; on an electronic screen, the traditional medical ethics is visualized; with a wall of plant specimens, the harmony between man and nature is retold.

Zhejiang Museum of Traditional Chinese Medicine with less than 5000 square meters of space, creates an intersection between ancient and modern, light and new exhibits of modern technology. How does a modern building of steel and cement make more than five thousand years of history of Chinese medicine culture "come back to life”? Recently, reporters walked into the museum, which combines old and modern, to find out exactly. After a long period of time, many Chinese medicine documents were lost, and many medical sites were destroyed. With the help of modern means such as light and shadow sound, Zhejiang Museum of Traditional Chinese Medicine (New Museum) brings the history of more than five thousand years back to us vividly. From the ancient Oracle to classic pharmacology works, the application of modern technologies depicts the Chinese nation's thought on health intuitively.

The charm of Chinese medicine also lies in the realm of "the sincerity of the great doctor, the never-ending pursuit of supreme good". In the museum, a "door of culture" is a fascinating stop. However, this is not a real door, but two walls covered with ancient medical plaques. Here stores a variety of medical plaques, for example, the plaque of the pharmacy "Cunren Hall" with golden paint as well as wood carving of dragons and phoenix from middle of Qing dynasty. Former doctors used to hang the plaques of praises on the wall to encourage themselves to always save the ill and wounded benevolently. And when they are preserved  till this day, hanging above the museum's white walls, not only do they become part of the preservation of Chinese medicine relics, but also with ancient stories inspire medical students to pass on the spirit of their forefathers, while calling on people to respect and care for doctors too.

The ancient books of Chinese medicine area have a large collection of Chinese medicine research books. A "Good Perscription of Su and Shen ", including the effective medical cures of Northern Song Dynasty, covering the fields of \surgery, gynecology, orthopedics and so on. Yan Yonghe, a very respected Chinese medicine practitioner in Zhejiang wrote "Jisheng Fang" recording hundreds of disease prescriptions, most of them are still being used till today, benefiting generation after generation.

Exhibits also link a lot of precious fragments in the history of the development of Chinese medicine - "Pingjiang map" is a city plan, between the paths crisscrossed in the city people can see the emergence of "hospital" and "Huimin Bureau", which is the early medical and health management agencies; and when it comes to the Han dynasty and Tang dynasty, the spread of Chinese medicine in Japan, Korea and other countries in East Asia comes into light, which can be seen as the earliest recordation of Chinese medicine’s international influence.

Walking to the third floor of the "Chinese medicine museum", right there is a colorful flower wall, consisted of more than 100 kinds of medicinal plants specimens. "Chinese medicine materials are all from nature; more than 100 kinds of flowers can be used in Chinese medicine." Zheng Hong said. According to the records, China found the medicinal function of flowers and its application long ago, the earliest pharmaceutical monograph "Shen Nong Herbs" recorded the efficacy of chrysanthemums, peonies, medicine, spin flowers, acacia, winter flowers and other flower plants. Zhao Xuemin, a Zhejiang pharmacologist in the Qing Dynasty, was the first person to list flower drugs as a separate category. In addition, the entire "Chinese medicine museum" exhibition hall, plant medicine, animal medicine and mineral medicine are also available, creating a nature-like atmosphere.