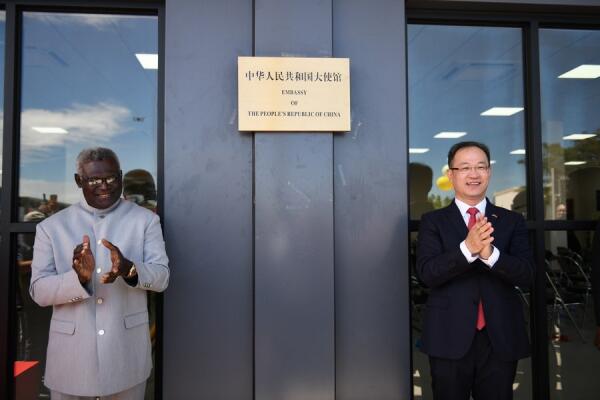 China opened its embassy in the Solomon Islands on Monday, one year after the two countries established diplomatic relationship.

"The achievements scored by the two countries demonstrated the establishment of diplomatic ties conforms to the trend of the times and benefits the two peoples," Li said while addressing the ceremony.

The ambassador said opening embassy at the one-year ceremony of the diplomatic relations is another important milestone for both sides.

"The embassy will continue to work hard to push forward the development of the China-Solomon Islands relations, deepen the bilateral cooperation and connect the two peoples."

Prime Minister Sogavare said the establishment of diplomatic ties with China based on the one-China principle and relevant UN resolutions is "the right thing."

China and the Solomon Islands established diplomatic relations on Sept. 21, 2019. In a joint communique signed on that day, the Solomon Islands government recognises that there is but one China in the world, that the government of the People's Republic of China is the sole legal government representing the whole of China, and that Taiwan is an inalienable part of China's territory.

He said the Solomon Islands will adhere to the one-China principle and push forward the bilateral relationship. He also expressed gratitude for China's assistance in the areas of infrastructure construction, pandemic prevention and natural disasters relief.

Saying the opening of the Chinese Embassy marking a new era of relations, Sogavare hoped the embassy would become an important platform to promote the bilateral trade, investment and cultural exchanges, and boost strong growth of the relationship between the Solomon Islands and China.