"Running chicken" is now the "new favorite" of the market. A "running chicken" of less than 1.5 kilograms values two or three hundred yuan, and an egg less than 20 grams is sold for 2.5 yuan.

What's so special about "running chicken"? How are they raised? With questions in mind, we try to find out the answers in the Wuxi township.

Chickens can only be sold after running a million steps

Luan Shaobo, the owner of Longao Chinese Herbal Medicine Planting Base in Wuxi She nationality township, took us to the chicken house. Push the door in, the house presented itself as clean and tidy. Luan Shaobo told us that the chicken is native Xianju chicken, which has an egg production rate of about 40%. That means, only 30 eggs are produced per day by more than 70 laying hens.

Later, Luan Shaobo took us to the Chinese herbal medicine base in the back mountain. Flocks of chickens with yellow bright fur, red crowns and black tails ran through the trees, slopes, and forests. The scene was quite spectacular. “Do you see the hoops on their feet? That's their pedometers.” Luan Shaobo told us that the chickens are customized with pedometers, the white plastic collars in the size of an adult's thumb, showing the step numbers of the "running chicken".

In the past, customers often questioned the authenticity of "running chicken" because of the lack of credentials. To this end, in 2019, Luan Shaobo put pedometers on the chickens, "each chicken has to run 1 million steps before it can be sold on the market."

"In this way, they are healthier," Luan Shaobo said. Under the fruit trees in the base, there are also heaps pf green and glossy Chinese herbs.

In 2011, Luan Shaobo came to Zhejiang from Anhui. Taking the suggestion of an old TCM doctor in Taizhou, he chose to contract 1,000 areas of forest land in Yunhe County to plant medicinal herbs.

However, weeds tend to grow wantonly, grabbing the nutrients of herbs. The "running chicken" solves the problem for the base. In addition, the harmful insects are also a favorite food for chicken. "Chicken manure is also conducive to the field!" Luan Shaobo pointed to the composting area next to the chicken house and said that they would regularly collect good chicken manure and sheep manure, mix it with hay and water, cover it with soil, and compost it. After two to three months of high-temperature fermentation, it will form natural organic fertilizer.

Additionally, various fruit trees like peach trees, pear trees and cherry trees are planted in the base. "Single medicinal material will consume a single kind of nutrient in the soil, thus different trees are introduced for the supplement of soil fertility.” In this way, chicken, fruit trees, and medicinal materials constitute a small "ecological chain".

When the harvest season arrives, Luan Shaobo will invite the villagers to the base to help plant, harvest, and transport the herbs. In recent years, some 200 farmers in the surrounding villages have earned nearly 2 million yuan by helping in the base, realizing the dream of "making money at home". 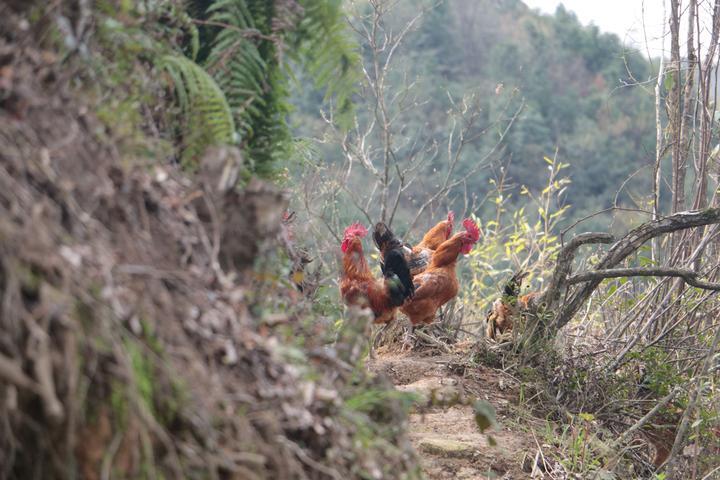 Bao Yan, Secretary of the Party committee of the She nationality township in Wuxi, said that pivoted on the golden idea of "ecological running chicken", the village launched a series of projects to increase the income of the left behind people, so as to drive the villagers to prosper. This year, Qiangcun Company signed an "ecological running chicken" adoption agreement with the local farmers.

At the same time, Wuxi Township actively cooperated with the Academy of Sciences of Hangzhou  Electronic Science and Technology University, successively investing 250,000 yuan for the integrated design and promotion of traditional Chinese medicine. They are also aimed at enhancing the added value of chicken, thus formulate the step counting method and packaging design.

Luan Shaobo is optimistic towards the future, "The chickens are selling well. Not long ago, I newly bought around 1,000 baby chickens. And I'm also trying to lay out a network in the base as soon as possible, so cameras can be set at multiple locations to realize fine management in the chicken house."