Featured | Cornucopia for She people lies in the sea

After Typhoon Hagupit left, everything was calm again. These days, Lei Mengge, a villager from Taotou Village, walks around the bank of the pond every day, throwing baskets of food into the pond. Born in 1973, with a neat crew cut and a smile on his dark face, he speaks with a native accent, "Can you tell that I am a She person?" 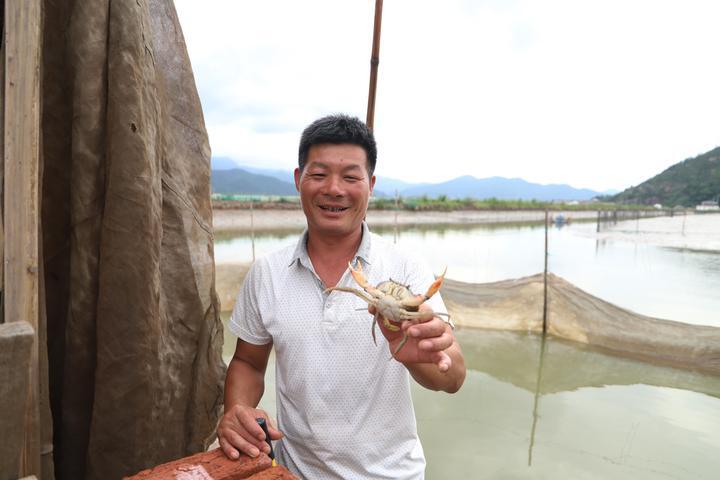 At 5 o 'clock every day, Lei drove his tractor to the feed mill to buy feed, which takes him more than 40 minutes. "The feed is fresh fish and shrimps. The pond needs more than 150 kilograms feed a day, costing more than 500 yuan," Lei said. And he calculated that the pond would yield nearly 400,000 yuan a year.

Like Lei, more than 90% of the villagers in Taotou village are engaged in aquaculture now. The village has formed a complete aquaculture industry chain, thus leading to the annual output value of more than 200 million yuan and the per capita annual income of nearly 100,000 yuan. In 1997, after being hit by typhoon No. 11, Taotou villagers decided to give up the planting, and started breeding aquatics. Later, they established "Sanmen Taotou Agricultural Development Co., LTD." In the first year, the total output value of the company reached more than 6 million yuan, and then the economy continued to develop rapidly.

At that time, Lei was working in a factory in Xiangshan, earning only 1,500 yuan a month. In 2006, Lei contracted for the village's breeding pond. At first, he knew nothing about aquaculture. Thus, his harvest was only half that of the others. But he didn’t give up. “I ask when I don't understand. I often ask others for advice,” Lei said. The village often invites experts to train villagers in aquaculture, and Lei was the most active student. With his efforts, gradually, he became good at breeding aquatics.

Nowadays, most Lei’s families are engaged in breeding aquatics. The breeding pond plays an important role in helping villagers to be well off in all respects.

There was a low bungalow beside the pond, except for the eldest son in the army, Lei and his families lived here.

Lei said with a smile that he actually had a big house. And then we followed Lei for a glimpse of his big house. The house is three stories high and has a courtyard.

In recent years, the collective income of Taotou village has grown from nothing to more than 12 million yuan last year. The villagers' living environment has undergone tremendous changes. The cement road is wide and flat, and the village is clean and tidy. Besides, the village also built a care center for the elderly and a cultural auditorium. People over the age of 60 can receive an annual subsidy of 300 yuan, and Lei’s old mother is included.

She people came here from far away, and finally they took root here. Lei said, “this place brings us hope and happiness.”