Having been working in the Xixi Wetland for almost 8 years, Cao Guohua has heard many praises of the area from tourists. As a native of Hangzhou, he knows the twists and turns behind this beauty, thus cherishing it more than ever.

More than 20 years ago, the local ecology was seriously damaged and large areas of wetlands were gradually declining because of the over-development of fishery and agriculture, as well as the villagers' weak awareness of environmental protection. In order to protect the Xixi Wetland, in 2003, the government adopted corresponding measures. It closed the Xixi Wetland and relocated farmers. Hence, Cao Guohua, who used to make a living as a fisherman, had to leave his boat. Cao began fishing with his father when he was 14 years old. In his memory, the boat was his home and the wetland was his childhood paradise. “ The water was so clear that you can drink it after being filtered,” Cao Guohua said.

However, the wetland was badly damaged due to the villagers’ mismanagement. "In the early 1990s, the feces and sewage were all discharged directly into the wetland," said Cao. Clear water gradually became black and smelly, which came as a terrible blow to the fishery.

The destruction of Xixi Wetland not only affected the lives of the surrounding villagers but also affected the healthy operation of Hangzhou's ecosystem. Therefore, the government took remediation and decided to resettle the villagers.

Like more than 13,000 villagers, Cao left the waters where his ancestors lived for generations. He knew that if the wetlands were to be revived, leaving was the best choice. After leaving Xixi Wetland, Cao Guohua became a machine worker. But the waters were always on his mind.

In 2005, Xixi National Wetland Park was officially opened. On the day the park opened, Cao Guohua and his family came early to wait at the gate of the park, excited and nervous. As Cao Guohua walked into the wetlands, memories of his childhood crowded in his mind. With granddaughter in his arms, Cao excitedly introduced, "That is the grandfather once fishing place, and that forest is a bamboo forest...”

The wetlands were preserved and Cao’s attachment to the Xixi Wetland was also retained. He quit his job in the factory and decided to work as a boatman in the park. 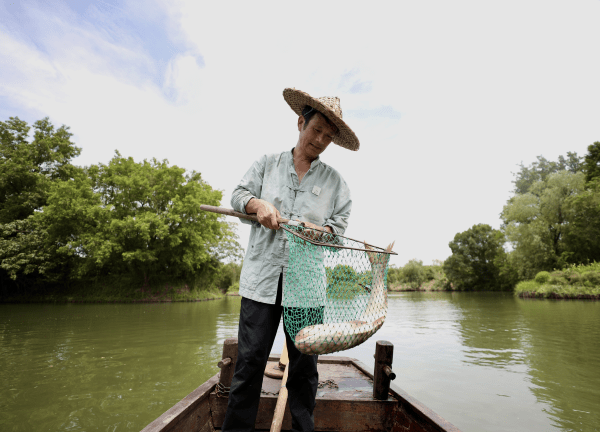 After going back to work on the ship, Cao Guohua’s life became more and more stable. In addition to taking tourists to visit the wetlands, he is looking forward to letting them experience the fishing culture most.

"In the past, fishing is for living. But now it's to let more tourists experience the wetland's traditional farming culture," Cao said.

With more and more visitors, Cao Guohua's mission of inheriting wetland culture took root and sprouted in his heart. He began to introduce the surrounding scenery to visitors, talking about the old Xixi Wetland, and showing them how to fish. "Xixi wetland is the place where our ancestors lived and it is our duty to pass on the wisdom of our ancestors," he said.

Cao Guohua is to retire in three years. Before he retires, he hopes to take apprentices and teach them fishing skills in order to keep the wetland culture alive.