Focus | Green transformation within the workshop 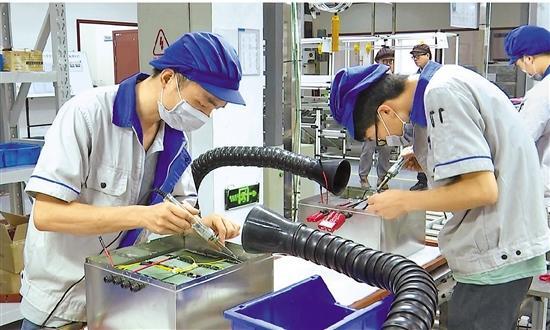 In the workshop of the EVPS Ningbo Co.,Ltd, automatic production lines are running orderly. Li Wenming, manufacturing director of the EVPS, said that factories should make efforts to achieve energy saving and environmental protection.

For the waste generated in the production process, the workshop can also achieve the "one-step removal". "You see, waste gas will be generated in the cleaning process, but we can dispose of it as soon as possible," Li explained. In the direction of Li's finger, an orange tube extends from a closed machine. A black filter is connected below, where the gas is purified before being discharged.

Whether the workshop can achieve green development often depends on several key sections. Whenever someone visits the workshop, the intelligent machine of aluminum wire welding will become the object of Li’ introduction. "We introduced this welding technology from the Tesla factory," Li said. Traditional electric resistance welding not only is inefficient, but also produces pollution such as waste smoke.

The company has invested heavily in purchasing 12 sets of the equipment. With the click of a button, the machines can accurately hit each cell, which improves the production efficiency by seven to eight times.

The introduction of new technology brings about process re-engineering. In 2019, the number of the production and sales of new energy vehicles in China exceeded 1.2 million, with a broad market prospect. The subsequent problem is the recycling of waste batteries.

Li said that the traditional welding method makes the battery difficult to disassemble, thus making recycle hard. By adopting the technique of aluminum wire welding, 73.61% of the products can be recycled, which not only saves the cost of raw materials, but also reduces the pollution caused by disassembling batteries.

One notable phenomenon at the factory is that there are more than 40 research and development staffs out of a staff of more than 100.

Therefore, in the workshop of EVPS, battery packs are subject to the tests of simulated car operation before they leave the factory. Only after four rounds of debugging and improvement can they officially "graduate".

"By increasing efficiency and making every bit of energy count, we can boost our productivity," Li Zhengdao said. EVPS is also improving the energy density of the battery pack.

EVPS’s advantages get the favor of many customers. Not long ago, a customer in Fujian placed an order of nearly 30 million yuan in one go, and will add more next year.

In Li Zhengdao’s view, the company’s research on product quality gained the initiative of development. At present, EVPS has passed the relevant international certification, and the opportunity of going abroad and participating in the international market competition is just around the corner.