On the stage, a teacher was singing songs whose lyrics were from ancient Chinese poems. Off the stage, Chinese teenagers and an international student were following the teacher to learn how to sing the song. Among them, a 10-year-old girl was lowering her head and writing down Chinese pinyin of every Chinese character on the lyric paper, as if she were doing an important school assignment. 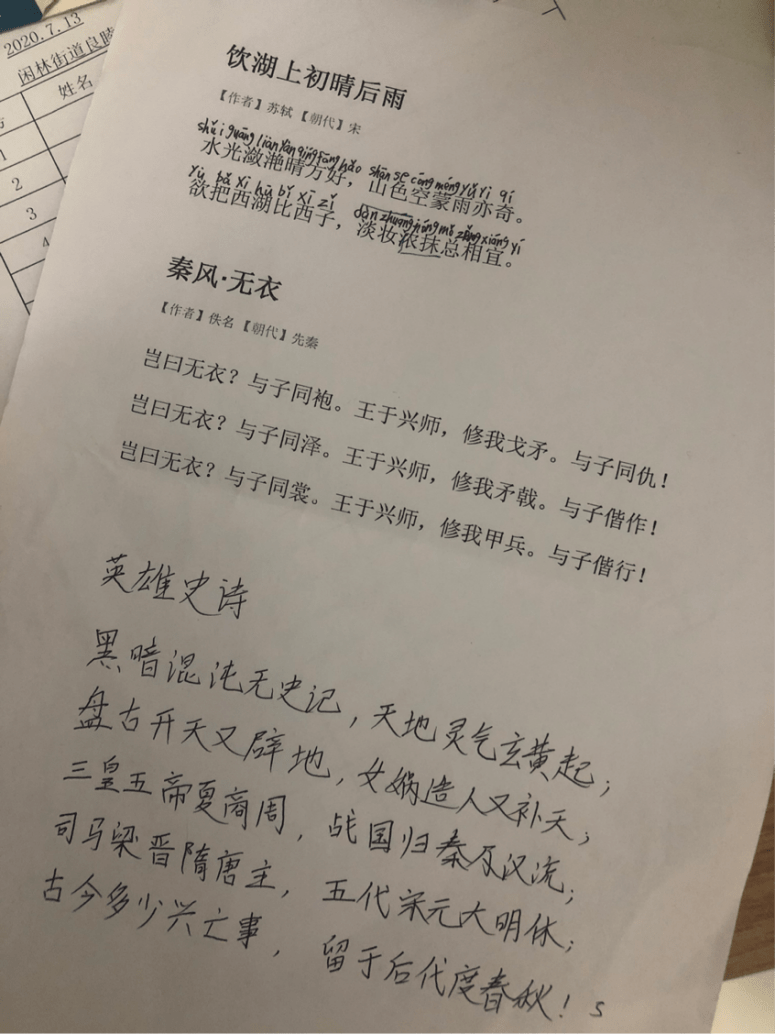 (The lyric paper with Chinese pinyin on it)

The scene was just impressive. It just further indicates that language is not a barrier towards mutual understanding among people who hold different cultural backgrounds.

From 29 to 30 July, as part of the "A Heart-to-Heart Dialogue" event, a group of international students and young Chinese teenagers were invited to visit an exhibition hall where they could experience local folklore and have a better understanding of the local history of Hangzhou as a whole. 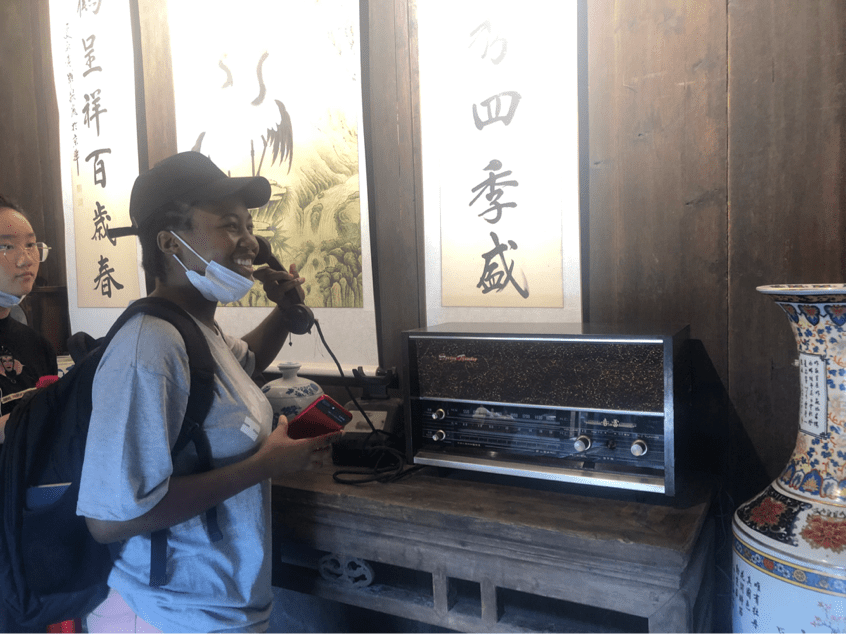 (A foreign student was pointing to a model hen)

A huge stone mill was placed in one hall, arousing the curiosity of both some Chinese teenagers and international students. With the assistance of the volunteers, some internationals made attempts to move it. "The furniture and equipment are fascinating. Seeing everything in one place makes me feel like I was watching Chinese series on television," said Lago Neah Maganga, a Tanzanian student. "It’s good that every detail of the equipment and furniture was kept well for all the years."

When they were back to the meeting hall where foreign students had made a presentation about their homelands on Tuesday, a music teacher came to teach them how to sing three songs whose lyrics were from ancient poems. When the night has fallen, bright lamps lit up the basketball court and added a fiery atmosphere to the upcoming art performance. Residents and foreign students arrived on time, and the site was soon full of people. At 6:30 p.m., the performance kicked off with a strong vibe of the Chinese community culture. (International students were singing and dancing at the site)

A burst of sunshine sent a beam of amber light through the windows to the teenagers and foreign students who were drawing colorful pictures on the postcards. On the morning of 30 July, the last session of the "A Heart-to-Heart Dialogue" event was held in Xiaohe Mountain, Yuhang District. Before the section of painting began, Mr. Shen made a presentation, on which he explained the definition and significance of multi-culture and integration by applying his knowledge as well as the experience of visiting the exhibition hall on Wednesday. (Students were listening carefully to the teacher's presentation)

As for the session of painting, teenagers and international students well cooperated in producing a batch of beautiful pictures. Some of them searched what they wanted to draw on the Internet, and put their mobile phones nearby to do the copying. 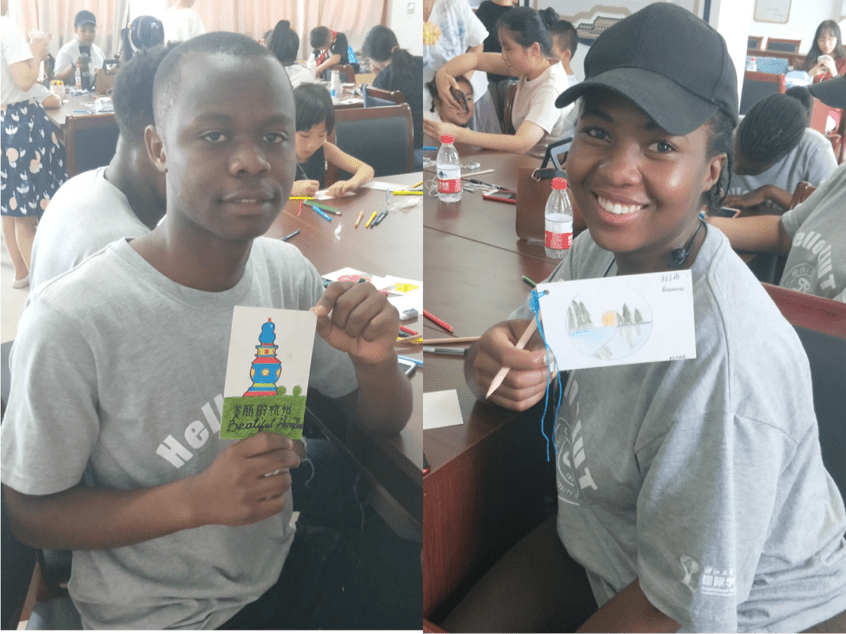 (Foreign students with their paintings)

"It was a good experience. A little boy whose name is Zhang Zihao sat next to me and finished his drawing before mine. I kept on looking at his drawing because it was eye-catching," said Paidamoyo Saziya, a Zimbabwean student. "I can further say that this activity also made us be interactive with these children, for we have exchanged the drawings and explained to each other what was in the drawings."

When it was time to say goodbye, international students received folding fans with traditional Chinese paintings as souvenirs. The special gifts were full of Hangzhou characteristics, which had left a deep impression on those foreign kids. 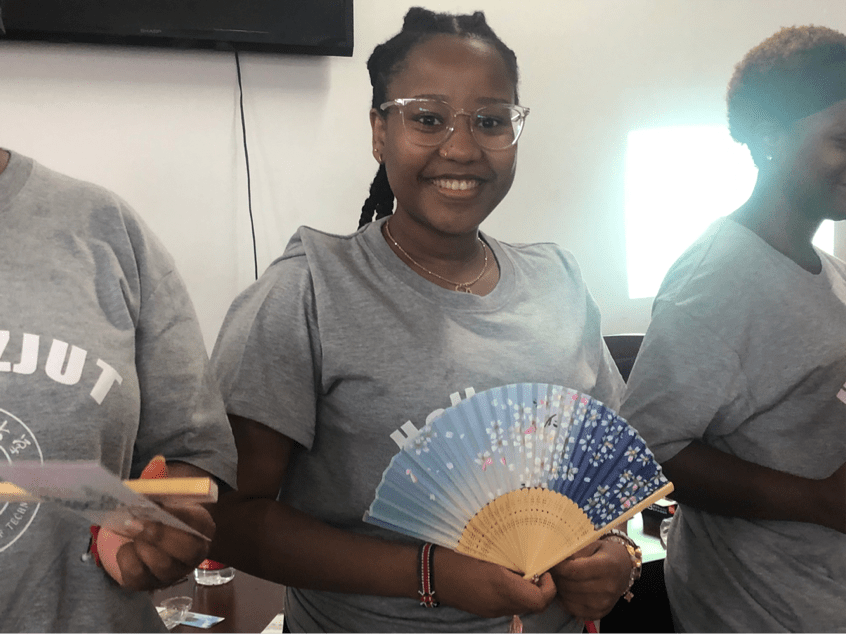 (A foreign student was holding her beautiful Hangzhou-style gift)

Although the three-day event has come to an end, there is still a lot the local society can do to help the integration of foreign nationals with the local community. The event organized by the Zhejiang University of Technology and Liangmu Community is such a big step toward promoting cross-cultural communication and improving the internationalization level of Hangzhou City.