BERLIN, July 13 (Xinhua) -- Trash separation is the talk of the town in China these days as the government unveils a list of 46 "pilot cities" to build up a garbage sorting and processing system by 2020.

Mandatory schemes on household garbage sorting have already emerged in metropolises like Shanghai in order to improve its recycling rates.

Moreover, an investment of 21.3 billion yuan (about 3.1 billion U.S. dollars) will be allocated to speed up building the recycling system, according to the Ministry of Housing and Urban-Rural Development.

Many European enterprises, with their advanced technology and rich experience, have seen enormous markets and are eyeing a share in China's ongoing green efforts.

Germany's ALBA group has brought one of its specialities to the southern Chinese city of Jieyang in Guangdong Province.

A complicated yet precise ingenuity was seen at one garbage processing plant. Chang said calorific value of the fuel block equals that of brown coal and can be used as alternative fuel in power or cement plants.

The project has received support from the local government, as dealing with mountains of garbage has always been a headache for many cities including Jieyang.

The plant, which started its test run in 2018, will be capable of handling 1,000 tons of garbage per day after completing its first phase of construction and 2,000 tons after the second phase.

Pei Albrecht, head of ALBA Group's China affairs, said many other cities have already shown interest in waste recycling technologies and the market potential in the coming years are beyond imagination.

"ALBA Group was invited to work out some plans for garbage disposals in cities like Taiyuan (in northern China). They're determined to solve their problems," said Pei.

Commenting on China's trash recycling efforts, Jurijs Trosenko, a regional manager of Solid Environmental Technologies company in Finland, said China has started to tackle the problem before it becomes too critical.

He said it is good for the vast country to set an example for all developing countries. 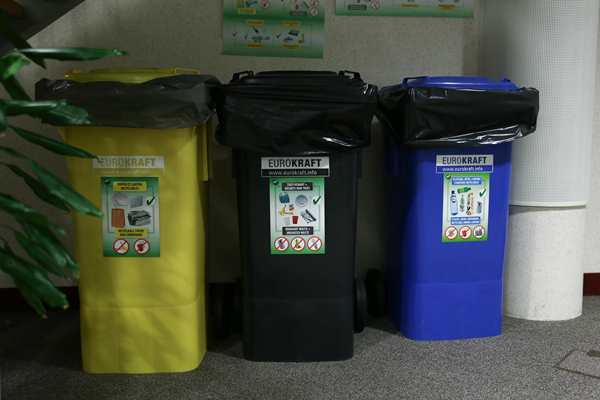 In Sweden, a small city called Hammerby, some 8 km south of the capital city Stockholm, has seen many Chinese delegations seeking advanced technologies in environmental protection in recent years.

Hammerby is now an eco-city model with large stretches of woods and lawns, as well as crystal clear rivers.

Some 30 years ago, the city was called a "garbage city" as it was heavily polluted with household garbages.

As part of the city's reincarnation efforts, biodegradable plastic bags were in place for garbage sorting, and vacuum underground tubes were built to send the sorted trashes to different processing centers. A garbage sorting volunteer checks the garbage at a community in Hongkou District of Shanghai, east China, June 24, 2019. (Xinhua/Fang Zhe)

ENVAC Group, an enterprise that took part in this drive, also went to China for business opportunities.

In March, ENVAC signed a contract with the White Peak Real Estate to supply its system to a new, smart eco-community in China's eastern coastal city of Yantai.

"Sustainable development and environmental friendliness is the feature (of the eco-community). We are trying to solve a myth that urbanization level is rising but people's sense of happiness is dipping," said Jesper Jos Olsson, president of the White Peak Real Estate.

With an eye on China's green future, Chinese enterprises are investing big in relevant European businesses.

Established in 1992, NOVAGO is said to be the largest independent waste treatment company in Poland.

The method will contribute to lessening dependence on traditional fossil fuels and help reduce the most harmful emissions, such as particulates, sulphur and ash, serving the crucial and ultimate goal of protecting the environment.