The 2019 Summer Davos meeting, also known as the 13th Annual Meeting of the New Champions kicked off on July 1 in northeast China's coastal city of Dalian. The forum is attended by more than 1,900 politicians, business people, scholars and media representatives from over 100 countries. 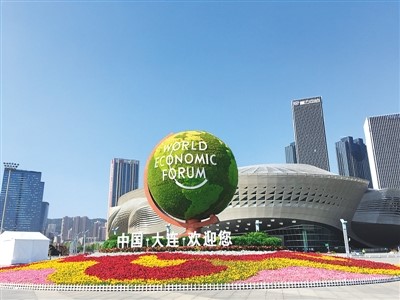 As the world’s second largest economy and the largest developing country, China is receiving wide attention for its economic development and influence.

Many participants to the meeting believe that China is making an important contribution to the global economy with its sustained and stable growth, as well as continuously improved development quality.

David Weigelt, who heads the innovation team at Home Instead Senior Care – the global leaders of in-home care for seniors, told People’s Daily that as a member of the World Economic Forum (WEF), his company witnessed China’s important role in promoting global communication and cooperation. China’s contribution to the world economy is impressive, he said.

Weigelt’s impression is supported by concrete facts. China maintained an average annual growth of 9.5 percent from 1979 to 2017, much higher than the world average of 2.9 percent in the same period. Since 2006, China has contributed about 30 percent to global growth each year, ranking the first in the world, being a key anchor and driver for the world economy.

Jing Ulrich, Vice Chairman of JPMorgan Chase & Co. Asia Pacific, said at the forum on China's Economic Outlook, a sideline event of the Summer Davos meeting, that China has contributed a huge part to global economy and is of vital significance to world economic development, which explains why global investors are acting actively in China.

China’s advantages are not only its achievements, but its planning over the next few decades, said Mike Moradi, CEO of American biopharmaceutical company Sensulin. He believes that China has made remarkable progress, saying that the country’s further development will benefit more global countries and enterprises.

The power for the long-term development of world economy comes from innovation. China’s contribution to the global economy lies in not only economic growth, but the promotion of technological innovation.

A series of statistics were released at a sub-forum on China’s biotechnological reform. 30 percent of American startups of biotechnology received venture capital from China, and US regulators for the first time approved an anti-cancer drug produced by China.

In the meantime, a question was raised at the sub-forum–what impacts will be exerted by China, a rising biotechnological power, on the global biotechnology industry?

Moradi felt strongly about this as Sensulin’s first round of financing was initiated by a Chinese investment group. He told People’s Daily that his company could have hardly survived if it were not for the Chinese investment. He believes that China is opening the door of high-tech development.

Last year, China had a huge leap forward and ranked as the 17th most-innovative economy in the Global Innovation Index.

Zhu Weiyan, a member of the WEF Precision Medicine Global Council, noted that China has made huge progress in innovation and incubation, and is making excellent performance in multiple fields. As China further docks with the world in regulation, human resource and monitoring, the country will shoulder more important responsibilities,” Zhu said.

Economic globalization is an irreversible trend of the time. Confronted by trade protectionism, China is still opening wider and sharing its development opportunities with the world.

According to recent research by the World Bank, if implemented fully, the Belt and Road Initiative could lift 32 million people out of moderate poverty, and boost global trade by up to 6.2 percent, and up to 9.7 percent for corridor economies. In addition, global income could increase by as much 2.9 percent.

Weigelt said that Home Instead Senior Care has entered the Chinese market a few years ago, and has been making efforts to exploit the market. China’s practical measures to open up, especially the relaxation on the market access of foreign investment, are very important for the company, Weigelt said, adding that they would offer assistance for his company to further expand the Chinese market.