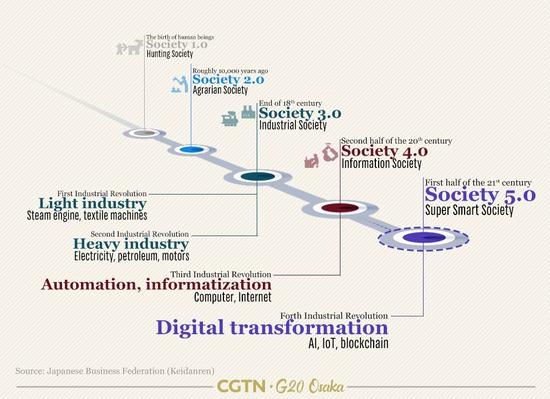 (From Society 1.0 to Society 5.0. /CGTN Infographic by Zhang Xuecheng)

First introduced at 2011's Hannover Fair, "Industry 4.0" was officially presented by Germany and soon became a tag that every industrialized society wants to attach itself to.

On the basis of Industry 4.0, Japan raised the concept "Society 5.0" in 2016, which is a technology-based and human-centered society.

According to the Japanese government, Society 5.0 represents the 5th form of society in our human history, chronologically following hunting, farming, industry, and information.

Japan is hosting the G20 summit for the first time in Osaka from June 28 to 29, and the topic of Society 5.0 is under discussion.

Society 5.0 is described by the Japanese government as the "Super Smart Society" which aims at creating a society where people can resolve various social challenges by incorporating innovations such as AI, robots and big data into society.

"Society 5.0 is a social state which material and information are highly integrated," said Ren Fuji, academician of the Japanese Academy of Engineering, the first Chinese scientist to be elected to this position, in an article titled "Human will enter the era of man-computer symbiosis."

Ren wrote that Society 5.0 enables society to provide certain goods and services to people who need them at an appointed time, and free people from inconveniences caused by age, gender, region and language differences.

Industry 4.0 is considered to be the fourth Industrial Revolution and highlights intelligent manufacturing. How is Society 5.0 different from Industry 4.0?

Aziyati Yusoff, director of Planning and Performance Management Section of Youth Skills Development Division at the Malaysian Ministry of Youth and Sports, mentioned three major differences between these two concepts in an article titled "Industry 4.0 vs Society 5.0."

Differing from Industry 4.0, which features effectiveness of using automated machines, Society 5.0 focuses on the effectiveness of optimizing knowledge workers assisted by intelligent machines.

"Industry 4.0 is about computerized communications by all means," Yusoff wrote, adding that Society 5.0 is "meant for the harmonization of work with the help of intelligent machines for the benefit of the workers."

Society 5.0 is more about humans

Japan is aiming to create a "Super Smart Society" that will make people's lives more comfortable and sustainable. The country believes that Society 5.0 could change the world in terms of healthcare, mobility, infrastructure and fintech.