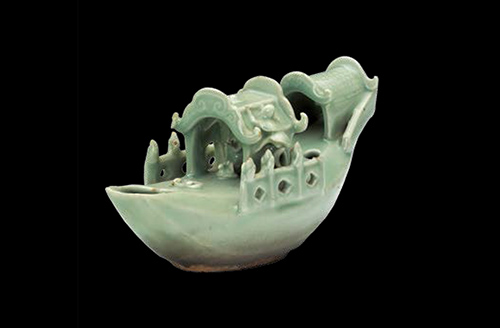 History: The yandi, also known as shuidi, was an indispensable object on the table of a man of letters. It is a small cup for adding water to an inkstone. According to Zhao Xihu of the Song dynasty, ‘ancient people had no shuidi. They ground the ink stick in the morning until the hollow of the inkstone was filled with ink, which would last a day. When used up, they ground the ink stick again. Thus, they had yu (wide-mouthed jar) [instead of yandi].’

Most of the yandi are made of porcelain. Some are made of metal, jade and stone. Toad-shaped yandi were popular during the Six Dynasties. Later their shapes became more diversified, but almost all were modelled on living things, such as gourds, melons and other fruits.

The boat-shaped yandi is a rarity, carefully crafted with openwork parapets and budtopped posts on both sides and upturned eaves on the awnings in the middle and at the stern. A pair of lovers sits in the boat. The boatman in a straw rain cape climbs up the awning for his bamboo hat. With the lake-green glaze the vessel is an embodiment of the taste and refinement of ancient literate men. The Longquan Kiln of the Yuan dynasty combined the southern and northern techniques. This vessel is a marvellous integration of various techniques, including openwork carving, appliqué and stamping.