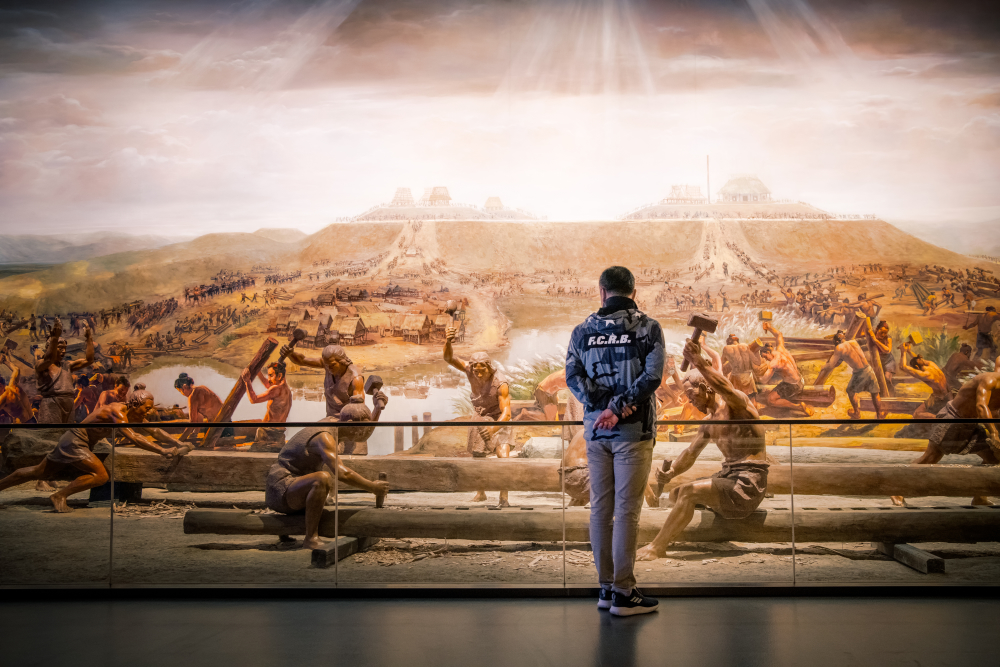 With a long history of development, Zhejiang is one of the cradles of ancient Chinese civilizations. As early as 50,000 years ago, there were groups of hominids, called Jiande people, living in today's western Zhejiang mountain areas during the Paleolithic Age. Traces of frequent human activity found here date from about 7000 to 4000 years ago.

Hemudu Culture
In 1973, the Hemudu Historic Site, an area covering 40,000 sq m, was discovered in the town of Hemudu, 20 km from the city of Ningbo in the Zhejiang Province. Hemudu Culture was one of the most significant cultures of the China Yangtze River region in the Neolithic Age at least 7 000 years ago, from 5000 BC to 3300 AD.

The Hemudu Historic Site contains the remains of Neolithic matriarchal villages and traces of clan relationships in the Yangtze River region from 7,000 years ago. Archeologists have unearthed abundant cultivated rice in Hemdu, which is considered the oldest and most abundant rice-growing culture site. Black potteryis another significant discovery at the Hemudu Historic Site. The discovery and identification of the Hemudu Culture indicates that both the Yangtze River and the Yellow River are the birthplaces of ancient Chinese civilization.

According to archaeological findings, the history of the Majiabang Site can be traced back to 5000 BC in the Neolithic Age. By 4000 BC, Majiabang Culture had developed into the Songze Culture. Evidence indicates that the Neolithic Majiabang Culture, the later Songze Culture and Liangzhu Culture from around the Taihu Lake are similar to one another, with distinct regional characteristics.
In March 1959, excavation began at the Majiabang Historic Site. A number of hunting and fishing tools were found, along with the remains of land and aquatic animals. There were many house remnants and some even with outdoor drains. Burial sites were discovered with all the dead of the same age, which was a feature of matriarchal society culture.
Entries on Majiabang Culture were included in the Encyclopedia Britannica and also in Xiangshan the Chinese Encyclopedia, Archaeology Volume (1990). Majiabang Culture is of great importance to the study of prehistoric archaeology.

In 2007, the accidental discovery of Liangzhu Ancient City not only changed the belief that Liangzhu culture was an early prehistoric civilization but also revealed that it had entered a mature stage of prehistoric civilization at that time. The State Administration of Cultural Heritage announced that the Liangzhu relics group were evidence indicating that Chinese civilization started 5,000 year ago. In 2012, the Liangzhu Site was listed on the World Heritage Tentative List.

Wu-Yue Culture
Wu-Yue Culture, also known as Jiangsu and Zhejiang Culture, is an important part of the Han civilization in China and also a traditional local culture. Wu-Yue Culture is a multi-culture, an integration of different ethnic groups and regional civilizations throughout history. As thousands of years passed, Hemudu Culture and Liangzhu Culture faded away into history, while Wu-Yue Culture has remained vigorous.

Kuahuqiao Culture
Kuahuqiao (Cross-the-Lake Bridge) Relics were discovered near Kuahuqiao Bridge in Xiaoshan City, Hangzhou in 1990. Xiaoshan was the birthplace of Zhejiang Civilization and its Kuahuqiao Culture emerged about 8000 years ago. It is also where Yue Culture-originated, the earliest prehistoric civilization in China.

Kuahuqiao Culture was quite different from other excavated relics, such as Hemudu Culture and Majiabang Culture. The history of rice cultivation was proven to have begun 1000 years earlier than previously believed and the earliest unearthed canoe in China was found. It can be concluded that Kuahuqiao Culture existed 1000 years earlier than Hemudu Culture (about 6,000-7,000 years ago) and is the earliest known Neolithic cultural sites in the Zhejiang Province.