A village in Jiangsu is set to be turned into an 'immersive' setting for a performance of traditional art, Chen Nan reports.

The small village of Shazhuang is located in Jianhu county, East China's Jiangsu province, nearly 300 kilometres north of Suzhou, and has a history of more than 600 years. Buildings from the late Ming Dynasty (1368-1644) and Qing Dynasty (1644-1911), trees that have survived centuries and fish-filled water bodies that allowed locals to make a living, are all there.

The village is set to be turned into an "immersive theatre", where visitors will be able to walk through its narrow, stone-paved lanes and enjoy live outdoor performances and interact with the performers.

During the upcoming National Day holiday week, from Oct 1 to 7, Jiulong Immersive, a multidimensional Huaiju Opera show, will make its debut in the Jiulongkou Scenic Area. Nine scenic spots in the surrounding area, such as an old arch bridge, a traditional Chinese pavilion, a teahouse and a small bay, will become performance sites. Even visitors who are unaware of such shows will find themselves experiencing an old-village setting. Ending the program will be a full Huaiju Opera performance, telling the history of Jiulongkou, which will be held in an indoor venue at the scenic spot. Huaiju Opera will be highlighted in the program, along with other traditional arts of Jianhu, such as acrobatics, which was listed as a national intangible cultural heritage in 2008.

Huaiju Opera has a history that dates to the Qing Dynasty and combines singing in the Jianhu dialect with dancing. It rose to popularity in Jiangsu and Shanghai in the 1950s. Inspired by folk ballads of regions on the northern bank of the Yangtze River, Huaiju Opera has roots in folk culture and is listed as an intangible cultural heritage. Jianhu is considered the birthplace of the Huaiju Opera.

According to Xie Chaoyun, head of the Jiulongkou Scenic Area management, the scenic spot has been dedicated to the promotion of Huaiju Opera since 2019. The idea started with a popular contemporary Huaiju Opera piece, titled Small Town, which, performed and produced by the Huaiju Opera Troupe in Jiangsu, won the Wenhua Award in 2016, a top national award for theatre works. The Huaiju Opera piece premiered in 2014 and has toured nationally, with over 100 performances. It tells the story of local families living in an old town and their life changes after a wealthy businessman, who once lived there, returns to the town.

"Thanks to the award-winning Huaiju Opera piece, audiences from around the country became interested in learning more about the traditional art form. The goal of making a 'Huaiju Opera small town' in the Jiulongkou Scenic Area is to offer people a closer look at Huaiju Opera and a tour experience of Jiulongkou," says Xie.

Xie notes that there are many legends about Shazhuang and Jiulongkou. One of them is about Huaiju Opera actor, He Jiaotian (1919-2004), who was born there and some of whose ashes were buried in Jiulongkou. 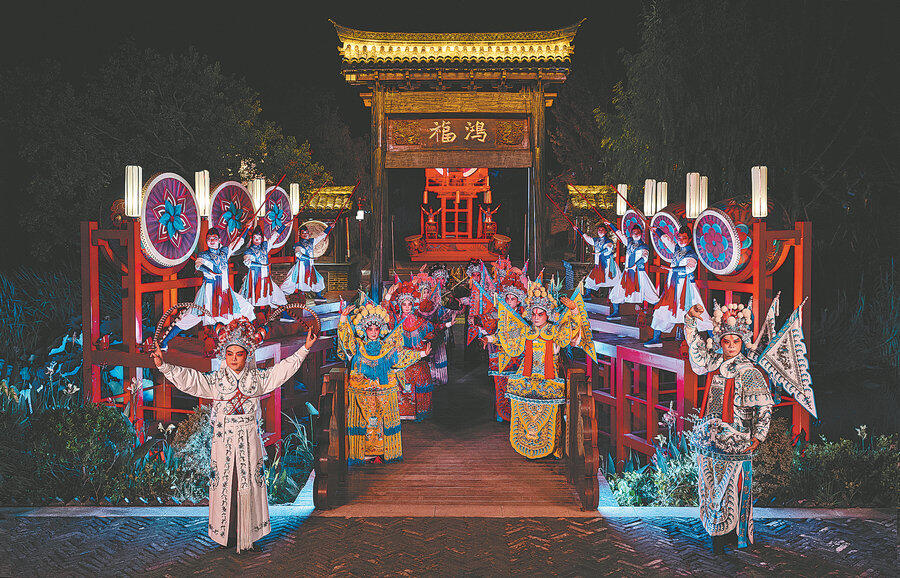 He adds that when it was decided that "Huaiju Opera small town "would be built at the scenic spot, residents of Shazhuang were encouraged to stay and the project has offered jobs to many villagers. Since opening to the public over a year ago, it has attracted about 50,000 visitors every day.

"When I first arrived in the Jiulongkou Scenic Area over six months ago, I was drawn to the beautiful natural scenery. I didn't leave the place for months to do research on Huaiju Opera and the local culture," recalls Gao Yan, one of the directors of the "immersive" program.

"I learned that Huaiju Opera is an old art form, which is still embraced by local people today. Just like karaoke, locals sing the Huaiju Opera songs to entertain themselves. It's part of their daily lives.

"I wanted to create a show which would allow more people, who may not be familiar with Huaiju Opera, to know about it. At the same time, they can experience more of the local culture."

Gao, who graduated from the Beijing Dance Academy in 2006 with a major in choreography, is known for directing shows combing tourism with outdoor performances.

She worked with Huaiju Opera performers, choreographers, acrobats and multimedia artists to create the show, which tells stories about Huaiju Opera with the help of 3D visual effects and projections.

She adds that after the show debuts on Oct 1, the team will adjust it based on audience feedback. It will become a regular feature in the Jiulongkou Scenic Area. Veteran Huaiju Opera artists, actress Chen Cheng and her actor husband Chen Mingkuang, have participated in the show as consultants. The award-winning artists work with the Huaiju Opera Troupe in Jiangsu.

"We were not sure about this show in the beginning, because we spent our whole lives working in traditional theaters. We didn't know if an immersive show would be able to fully display the beauty of Huaiju Opera and if audiences would accept it," says Chen Mingkuang.

"However, as the show was developed gradually, we felt confident and excited."

He is the director of the Huaiju Opera Troupe and has played the leading role in the opera piece, Small Town.

"There are displays of the opera, which the audience can enjoy in theatres, like singing and dancing. There are also things that they cannot see in theatres, such as how Huaiju Opera performers prepare themselves backstage, from wearing costumes to putting on makeup."

Chen Cheng, who has promoted the old art form also by livestreaming performances along with her colleagues in recent years, says, "Like many traditional Chinese operas, Huaiju Opera has to stay alive through creative ways. Young audiences, in particular, always want to have something fresh. The immersive show will offer them a glimpse of Huaiju Opera with a different experience."