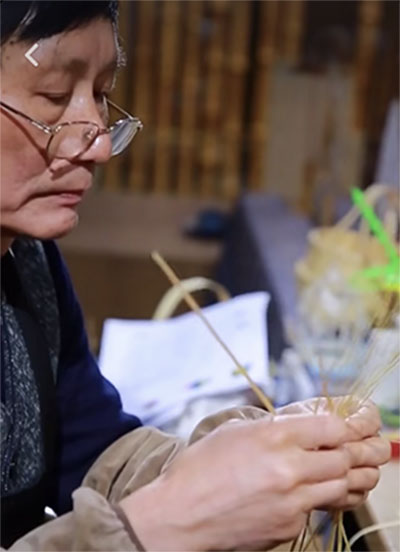 Zhang Xinrong, 63, is an inheritor of Xiangshan bamboo crafts, an intangible cultural heritage of Xiangshan County in Ningbo City. The county is rich in moso bamboo and experienced craftsmen. Zhang has been engaged in bamboo crafts since he was 15 years old.

Bamboos are widely used in crafts, as Zhang Xinrong said, "Bamboo could be used to make all kinds of crafts such as daily articles, farm tools, fishing tools and interesting decorations."

"Though already 60 of age, I'm a man of style," he said. After uploading the video of him making bamboo Barbie dolls for his granddaughter, Zhang has won thousands of ‘likes’ on Douyin, a popular video sharing platform in China.

Zhang was encouraged to upload more videos on the platform. The most welcomed one was 'liked' by 1.077 million people with over 16,000 comments. His Douyin account @竹编技艺大师(奇人匠心) has gained over 5 million 'like's in total, making himself a celebrity overnight.

The preservation of skills requires fashion elements. In addition to daily articles and farm tools, Zhang Xinrong also explored creative goods such as fashionable bags, cell phone cases, tea wares and even lighters. The popularity of video boosts his business -- some popular goods always sold out as soon as they hit the shelves on his online shop.