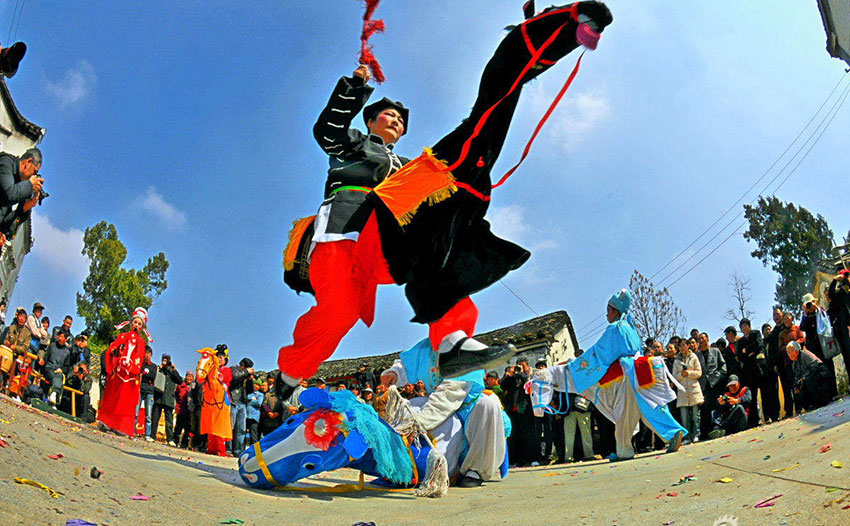 Chun’an, located near the city of Hangzhou and the largest county in the Zhejiang province, is renowned for its rich long history and scenic Qiandaohu Lake (or Thousand Island Lake). In addition, its tradition of bamboo hobby-horse dancing goes back more than 600 years. It was in Chun’an that Emperor Zhu Yuanzhang is said to have been defeated and then later regained power at the end of the Yuan Dynasty (1271 AD-1368 AD). According to the legend, an immortal being gave Emperor Zhu a strange colored-paper bamboo horse which upon riding he discovered to be magical and able to run very fast. With the help of this divine horse, Zhu won many great battles and became the first emperor of the Ming Dynasty (1368 AD-1644 AD). Made of bamboo strips and decorated with colorful paper, the earliest bamboo horses were used as sacrificial utensils. Later, the people of Chun’an developed the style of the horse and began performing at every important festival. The movements of the colorfully-clad dancers are believed to bring good fortune and protect people from plagues and disasters. After several decades of not being done, the bamboo hobby-horse dance has been renewed and the local people once again organize and perform it. In 2005 the Chun’an bamboo hobby-horse dance was added to Zhejiang UNESCO Intangible Cultural Heritage List.