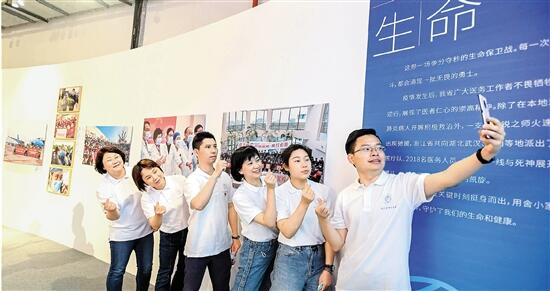 A photo exhibition that depicts Zhejiang province's efforts in controlling the COVID-19 epidemic opened in Hangzhou on May 8.

The exhibition is held by Zhejiang Daily, Zhejiang Publishing United Group and the government of Xihu district of Hangzhou.

Displayed during the exhibition are more than 300 photos that capture the touching moments of Zhejiang people during the fight against the epidemic. The people photographed include government officials, medical personnel and community workers.

The photos were selected from a picture book launched on the same day that documents Zhejiang's epidemic control efforts. 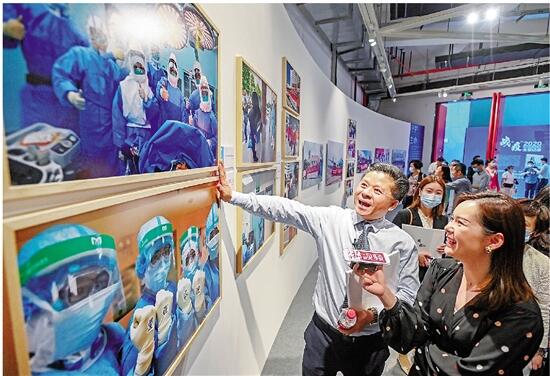 Han Weili (left), chief physician of the lung transplant department of the First Affiliated Hospital of the School of Medicine of Zhejiang University, talks to a news reporter about a photo showing him and his colleagues working on the frontlines.

Representatives of several hospitals from Zhejiang attended the opening ceremony of the exhibition. Among them were medics from the first and second affiliated hospitals of the School of Medicine of Zhejiang University, as well as crew members of Loong Air airline which flew medics from Zhejiang province to Hubei province and back.

The organizers of the exhibition presented the book as a gift to these hospitals and Loong Air.

"These pictures remind me of my days in Wuhan," said Yang Zhiqiang from Zhoushan Hospital, "I remember the beautiful sunset on the day of my return and I couldn't help crying when getting off the plane."

"The patient in the picture was critically ill when admitted to the hospital and almost gave up. Fortunately, he recovered after about 20 days of treatment and thanked us with a bow when he walked out of the hospital," said Liu Limin, leader of Zhejiang's first batch of medics who were sent to Jingmen, Hubei province.

The exhibition lasts till June 30. Admission is free. 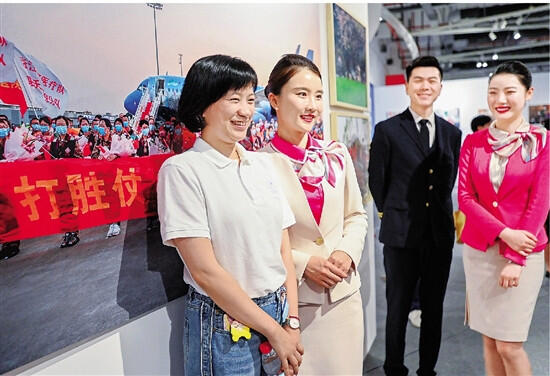 A medical worker who was sent from Zhejiang to Hubei poses for a photo with a Loong Air crew member whom she met on the airplane.