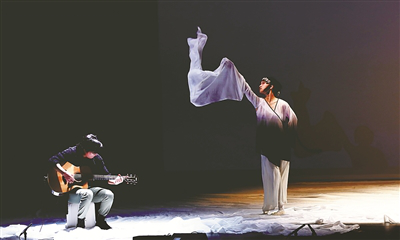 President of the Royal Scottish Dance Association said: "This is the best performance I have seen in the three-day Chinese Culture and Art Festival.

On the afternoon of the 11th local time, the original experimental drama “Yangming Wang” by Ningbo Culture and Art Research Institute was presented at Edinburgh International Conference Center in UK and it was a great success.

The drama shows the legend of sage Wang Yangming who devoted himself to the country and the people. The scene of the day's performance is very warm:  audience are applauding and the applause lasts nearly 5 minutes.

“Your performance is very exciting. This is the best performance I have seen in the three-day Chinese Culture and Art Festival...” Brian Gee Harry, President of the Royal Scottish Dance Association, complimented the show for the artistic level after watching the performance.

He is willing to recommend more platforms for the show of "Wang Yangming". Yu Peng, the Cultural Counsellor of Chinese Embassy in the United Kingdom said that foreign friends can fully understand the story. In the history of Scotland, there are also characters like Wang Yangming, which can make everyone find resonance.

According to reports, after arriving at Edinburgh, the crew participated in the cultural exhibitions and exchanges held by the Edinburgh International Convention Center, and promoted Ningbo culture and tourism to the teams and audiences from all over the world. Two roadshows were held at the famous Royal Mile in Edinburgh, highlighting the heritage and connotation of Ningbo as an ancient port of Maritime Silk Road.