On the morning of November 13th, the 5th World Zhejiang Entrepreneurs Convention themed with "Collecting High Quality and Building the Chinese Dream Together" was grandly opened at the Hangzhou International Expo Center. At the opening ceremony, the list of leading enterprises in the "high-quality development" selected by Zhejiang Province for the first time was announced, and 15 companies were on the list. 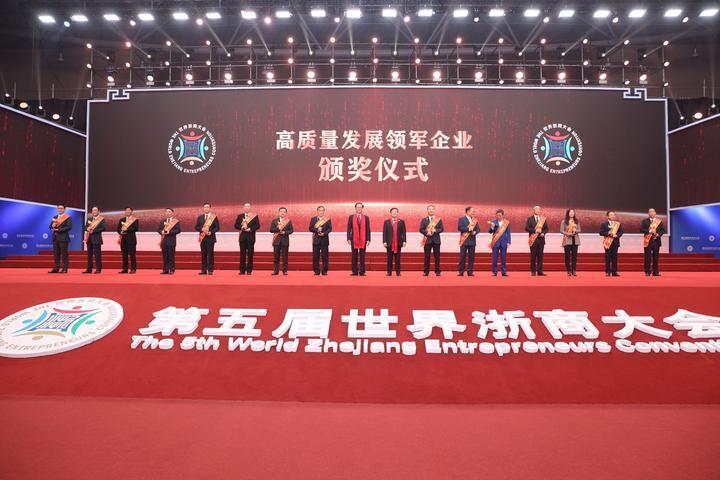 Founded in 1969, Wanxiang Group is the first batch of private enterprises in China. Its manufacturing and technologies in auto parts and clean energy have been operated globally, and it is the world’s largest manufacturing company with the most patents.

Founded in 1986, Tianneng Group has become a large-scale industrial group with a focus on the manufacturing of environmental protection battery for electric vehicles, integrating R&D, production and sales of lithium batteries of new-energy vehicles, automobile start-stop batteries and storage batteries of wind and solar energy. It also focuses on the recycling and reuse of waste battery, urban intelligent micro-grid construction and the construction of green intelligent industrial parks.

Founded in 1986, Transfar Group started from the manufacturing industry and has continued to develop rapidly over the past 30 years. It has grown into an industrial group covering fields such as chemical, intelligent logistics, modern agriculture, science and technology city, and financial investment in more than 80 countries and regions.

Alibaba (China) Co., Ltd. was established in 1999. Its business and related companies include: Taobao, T-mall, Ant Financial, Alibaba Cloud, Cainiao Network, AliExpress, Alibaba.com., 1688, Alimama, etc. Alibaba is the only Chinese company listed on the 2019 Most Admired Companies in the World by Fortune.

Founded in 1987, Hangzhou Wahaha Group Co., Ltd. has 80 production bases and more than 180 subsidiaries in 29 provinces and autonomous regions across the country, with nearly 30,000 employees. The company’s scale and benefits have been ranked No.1 in China’s beverage industry for 20 consecutive years.

Hangzhou Hikvision Digital Technology Co., Ltd. is a service provider of smart solution for Internet of Things and big data with video as its core. Hikvision has core technologies such as video and audio codec, video image processing, video and audio data storage, and its products and solutions are used in more than 150 countries and regions.

Founded in 1986, Zhejiang Geely Holding Group entered the automotive industry in 1997 and has been focusing on the industry, technological innovation and talent cultivation, and unswervingly promotes enterprise transformation, upgrading and sustainable development.

Zhejiang Rongsheng Holding Group is headquartered in Xiaoshan District, Hangzhou, and was founded in 1989. At present, the Group has developed into a modern enterprise group with petrochemical, chemical, real estate, financial investment and other industries.

Zhejiang Energy Group Co., Ltd. was established in 2001. It is the main starting point of energy industry development of Zhejiang Provincial Committee and Provincial Government, the main platform of energy cooperation, the main channel of energy supply, the main force of energy security and the main battlefield of environmental protection.

Hailiang Group was established in 1989, with an industrial layout of 12 countries and regions, and its marketing network radiates globally. The subsidiary Hailiang Education Group is the first basic education group in China to be listed in the United States, the benchmark of basic private education in China.

Founded in 1979, Youngor Group is a leading company in the national textile and apparel industry. After 40 years of development, Youngor has become a comprehensive international enterprise group of diversified and professional development, with brand development as its core.

Founded in 1987, Futong Group is a global leader in the optical fiber communication industry for Internet-based transmission materials. It is an important promoter of the national energy and power cable transmission industry, with technological innovation and technological leadership as its core competitive advantages.

Hangzhou Delixi Group is one of the three advanced manufacturing bases of Delixi and is one of the largest high-tech industrial bases for instrumentation and automation in China. The company covers seven leading areas such as home electrical, electric meters, frequency converters, three-way catalytic converters, transmitters, automation, and capacitors.