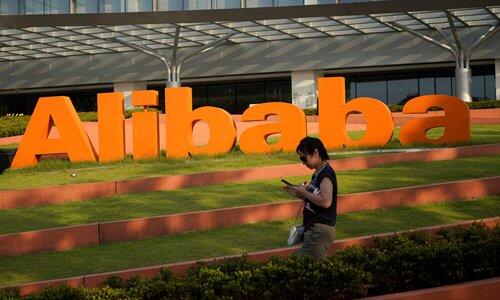 The logo of Alibaba Group is seen at the company's headquarters in Hangzhou, East China's Zhejiang Province.  (Photo: VCG)

Led by a new chairman, Alibaba Group Holding, the largest e-commerce company in China, has put globalization ahead of domestic demand and big data/cloud computing in its future strategy, which shows it is inclined to put more effort into exploring overseas markets, experts told the Global Times on Monday.

This is also in line with the trend for first-tier Chinese companies to explore new markets to support growth, which is unstoppable by external obstruction such as trade protectionism, they said.

The three-pronged future strategy was made clear in a statement Alibaba sent to the Global Times on Monday, when Alibaba began its 2019 global investor conference in Hangzhou, capital of East China's Zhejiang Province. A few days ago, new chairman and CEO Zhang Yong emphasized the three strategies at Alibaba's 20th anniversary on September 11.

"The fact that Alibaba has put globalization ahead of domestic demand shows that the company is inclined to place a bigger bet on international market growth than on domestic markets, which are increasingly saturated," Li Yi, a senior research fellow at the Internet Research Center of the Shanghai Academy of Social Sciences, told the Global Times on Monday.

"I am not saying that the domestic markets are not important for Alibaba anymore. However, with Alibaba's success in expanding the domestic e-commerce market in the past 20 years, it's very hard to achieve the kind of fast growth in China that meets the expectations of capital markets," Zhang told the Global Times on Monday.

Alibaba has set ambitious consumption goals, both in the short and long terms.

Zhang Yong has announced that Alibaba will help generate consumption of more than 10 trillion yuan ($1.4 trillion) in the next five years via the continued growth of Alibaba platforms, according to the statement.

He also said that Alibaba's long-term goal is to serve 2 billion consumers around the world by the end of 2036, create 100 million jobs and help 10 million small and micro-sized enterprises make profits.

Zhang Yi said that as the bulk of Alibaba's investors are from overseas, which gives the company a natural advantage to develop its international business.

Zhang Yi also said that Alibaba is a typical example of domestic first-tier enterprises that are looking for new markets to fuel their growth.

"This is an irreversible trend not only because Chinese companies are searching for overseas markets, but also because many overseas markets need the talent, technologies and business models from China. This won't be obstructed by external forces such as trade protectionism," Zhang Yi said.

Li said that Alibaba's position as China's largest e-commerce company is unlikely to be shaken despite rising competition, at least in the short term, thanks to Alibaba's comprehensive strength such as its complete business ecosystem and brand image.