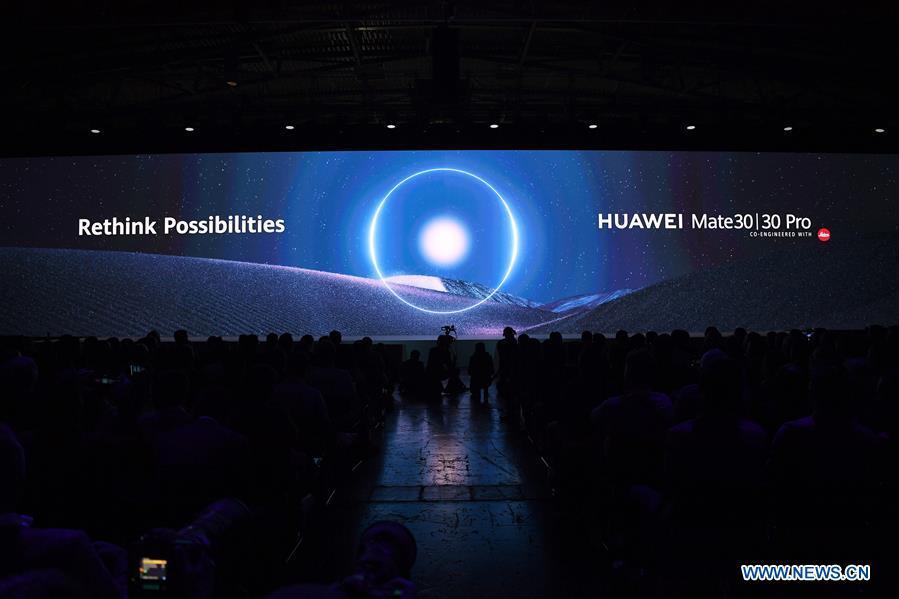 According to Huawei, the new generation smartphone, which is equipped with all new Kirin 990 5G SoC processor and comes in six different colors, is the first to integrate processing units and a 5G modem on the same chip using the 7nm+ EUV (extreme ultra-violet) process.

In addition, Huawei also launched its HUAWEI WATCH GT 2 range of wearables. Equipped with the self-developed Kirin A1 chip, the new product range offers class-leading battery life and a host of new features and functions.

The Huawei Mate 30 Series unleashes the full potential of the smartphone. Designed to stand out, it challenges convention while delivering an unrivaled user experience, Yu continued.

"The era of 5G is an opportunity to rethink smartphone technology and the Huawei Mate 30 Series is the ultimate expression of what's possible," Yu said, while having received many times of applauses from present audiences.

Hundreds of participants including media representatives from all over the world attended and witnessed the launch conference.

Ben Wood, chief of research at CCS Insight, an industry analyst firm, told Xinhua on Thursday that once again Huawei has shown that it can deliver best in class hardware.

"The camera offers a great choice of different lenses and extremely high-quality video recording while the screen is upgraded and the new interaction methods such as being able to turn the volume up and down by sliding your finger up and down the side of the phone is impressive," Wood said.

However, the lack of Google's Play store and key Google services such as Maps and YouTube are a major challenge, Wood commented.

"These are anchor apps for most smartphone users. And there is also a risk that consumers will buy a new Huawei and then find it does not offer everything they expected and will decide to return it," Wood added.

One of the most important reasons for Huawei's success is innovation.

Huawei has set up a lot of R&D centers in Europe, such as Germany, France and the UK.

"As for Huawei, we started 5G research development 10 years ago, so we have already invested in 5G more than 4 billion U.S. dollars. The research and development innovation, as I mentioned, is the core of Huawei's strategy," Victor Zhang, Huawei Senior Vice President, told Xinhua in a previous interview.

Huawei is reported to invest at least 10 to 15 percent of global revenue in R&D each year. And the Chinese giant has invested altogether more than 17 billion dollars in R&D in the last 10 years.

"I don't think there is any one company with their products 100 percent of components made by themselves, because of globalization. We welcome all the best technologies we can use to serve our customers and to bring the value to our customers," he said.

Zhang believed that win-win solution is the cooperation, so "we must be open for embracing the new technology from a global source, rather than close the door just for the indoor research development."

"One purpose is to try to achieve the leader for this industry, and also to provide the best solution for our customers. On the other hand, we think we have the capability to respond to any restrictions, especially from America," Zhang added.