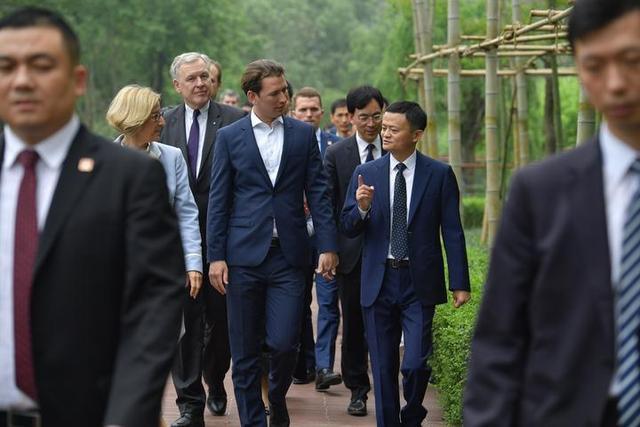 On April 25, Sebastian Kurz, the Prime Minister of Austria, visited Alibaba’s headquarters in Hangzhou, Zhejiang Province. He expressed his appreciation for the tour and conversation with Jack Ma. During the conversation, they discussed how European small-sized enterprises can share the opportunities of globalization in the digital era. Kurz posted two photos with Jack Ma on his Twitter and remarked, “I wish you all the best for the philanthropic efforts in education, female leadership and entrepreneurship, which you are dedicating yourself to.”

Kurz’s delegation included Johanna Mikl-Leitner, the governor of the Lower Austria state, Petra Bohuslav, the economic minister of Austria, and Martin Eichtinger, the minister of foreign affairs of Austria. Led by the young prime minister, they showed interest over cutting-edge innovation and how Alibaba created miracles in the era of digital economy.

Jack Ma suggested that Europeans countries could consider introducing eWTP to assist the development of small-sized enterprises. According to Ma, under the conventional model, products of small enterprises can only be sold in their own cities. With the development of the Internet, their products can be sold to other regions of their country and abroad. Many European small enterprises have only sold their products in native market. Today these products can be spread to international markets, such as the ones in China or Southeast Asia via the Internet.

An increasing number of small and medium-sized brands of Austria are introduced into China via Alibaba. Apart from Swarovski, other 55 Austrian brands have also settled in Tmall International, a B2C platform part of Alibaba Group, including Lomography, AKG, hogl, Manner, Amaroy, RAUCH, Scoot & Ride, etc., which cover more than 20 categories of products including accessories, watches, digital devices, female shoes, snacks, coffee and oatmeal, toys and wines. In 2018, the overall turnover of Austrian brands on Tmall International grew by 500% year on year.

According to the data released by Fliggy, a travel brand under Alibaba, Austria has become unprecedentedly popular among Chinese tourists in recent years. Over the last year, the platform detected a 109 percent increase in the number of tourists traveling to Austria. On April 9, the National Tourism Administration of Austria and Piggy signed a cooperation agreement on co-building the Fliggy national hall of Austrian tourism.

In the future, Alibaba plans to promote the popularization of Alipay in Austria, with an aim to provide more convenience for Chinese tourists in all aspects such as travel, payment, information and products.