In the 1980s, a large batch of private entrepreneurs emerged in Wenzhou. In 1980, Xu Chenglong resigned from his guaranteed job and sold out all his family belongings. Carrying 200 yuan, he left his workplace to start up business, which later became one of the first individual businesses in Wenzhou.

Xu found that the profit margin was relatively higher in the glasses business, so he established Wenzhou Shunchang Optics Co., Ltd. and devoted into producing glasses. When the market of glasses was nearly saturated, he spotted a new business opportunity. “I have found that newly emerged laser glasses are very popular in the market. It was invented by Americans and there is no such technology in China,” Xu recalled.

At that time, he already had saved more than 3 million yuan. In order to seize the new opportunity, he spent all his savings in the research and development of the new product. After more than a year and half of research, he managed to develop a fully upgraded laser holographic lens, which filled the gap of the existing Chinese market. When the product was first marketed, it immediately became popular and even entered the American market. Later, it was designated as laser sunglasses for the World Cup 2002 and was sold to countries including Spain, Italy, and France.

At that time, there were few households with a saving or an annual income of 10,000 yuan. Owing to his invention patent, Xu earned 30 million yuan in five years and became well-known.

For Xu, his secret of success is his persistence in innovation and entrepreneurship. 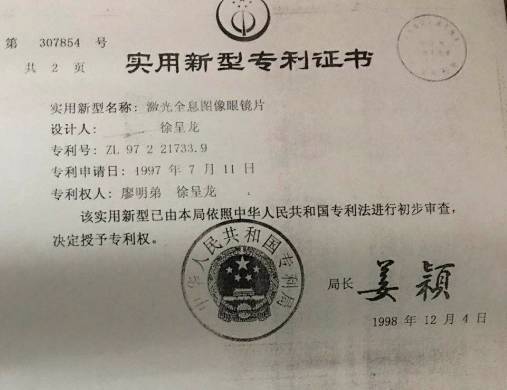 In 2012, as the glasses market of Wenzhou entered a bottleneck, Xu officially migrated to Los Angeles of the United States and established a company specialized in wholesale of sunglasses to explore the overseas market. Within five years, his company’s sales grew by 20% year on year and now its annual sales have reached 300 million yuan. In addition, he cooperated with many glasses manufacturers in Wenzhou and helped them sell their products to the US. In 2017, Xu and some members of the U.S. Wenzhou Association, together with other Wenzhou merchants in the US, officially established the U.S. Wenzhou Chamber of Commerce where he served as the executive president.

The establishment of the chamber of commerce brought “the strength of a team” to Wenzhou people in the US. On the website of the chamber of commerce, foreign companies not only can find their favorite products from the product display section but also can get in touch with selling channels. This time Xu returned to Wenzhou in the hundred-member delegation to China as the executive vice president of the Zhejiang Chamber of Commerce USA. Through exchanges, he wished to bring talents back to Wenzhou to assist the innovation and business of local enterprises in Wenzhou.